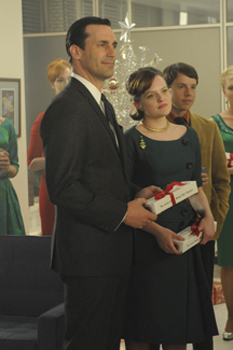 It's a Mad Men Christmas! On this week's episode, Betty, Henry, and the kids go tree shopping, and the office celebrates with an impromptu party—but of course, all is not as cheery. Don is suffering from holiday loneliness, Peggy has boyfriend troubles, and Lee Garner Jr. wants nothing more than to make Roger look like a fool (seriously, how much longer can they put up with that guy before they just let go of the Lucky Strike account?). In an especially sad moment, Sally sends a letter to Don—addressed to Santa—admitting that all she really wants is a visit from her father on Christmas morning. But on the upside, there's a conga line! I'm ready to break down some of the maddest moments of the evening, so let's get down to it when you read more.

What did you think of this week's episode?