Remember last week's Mad Men when Don leaves his office door open? I assumed it was so he'd be more accessible to his employees, but I had no idea that Don would be letting down his walls for us as well. If that episode is about Don hitting bottom, then this week is how he starts digging himself out. First order of business: start a journal. Perhaps inspired by Roger's own memoirs, Don takes to paper to chronicle his thoughts and get him off the booze . . . a little. It's as dour as you might expect, but a perspective that I'm excited to see nonetheless. 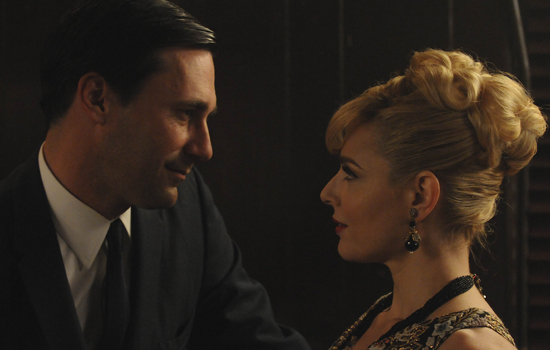 At the forefront of Don's mind: how people always want more than they have. It's a theme that applies to Don's drinking and his appetite for women, but also to Betty's own dreams of a picture-perfect life with Henry. However, by the end of this episode both of the exes change their spots (for now). It feels like the signal of a new era for Mad Men, where anything could be possible for the characters—and it has me excited to see where the rest of this season goes. Let's take a look at the night's events when you read more.

What did you think of the episode? Are you rooting for Don and Dr. Faye? Excited to see Betty move on? Still giggling over Mad Men's first full moon? Share your reactions below in the comments!