This week our beloved Glee club members encourage each other to smile, smile, smile — but there's more angst than laughs in the episode. The kids do their best to avoid having their photo defaced in the yearbook (though they ultimately fail), Sue tries once again to take down the club, but the biggest moment of all belongs to Mr. Shue when he finally discovers that Terri's pregnancy is a farce. 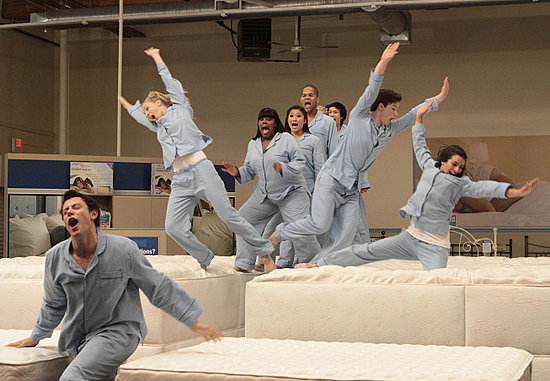 There's lots more to discuss with only one new episode to go (!!!), so to get into it, just

Mr. Shue struggles in many of his relationships this week; he's upset when Emma tells him that she has to skip sectionals for her own wedding, and he has spats with Principal Figgins and Sue when glee is denied a yearbook photo. But, of course, the crux of the episode is his fight with Terri. In arguably the most emotional scene of the show since Quinn's confrontation with her parents, a teary-eyed Will faces Terri head-on after he finds her pregnancy pad. It's kinda hard to believe that weeks and weeks of build up could unravel so quickly. Even after so many episodes of hating Terri's guts, it's hard not to feel bad for her when she's fighting with Will in the kitchen. The icing on the cake is that Will inadvertently brings down the glee club when he sleeps on one of their free mattresses, thus making them eligible for disqualification from sectionals. Poor Mr. Shue really can't catch a break.

So, how'd you feel about all the drama? Are you glad the cat's finally out of the bag? What are your hopes and predictions for the finale? I'd love to see something finally happen with Emma and Mr. Shue, but I can't really let myself believe that Terri's out of the picture for good.