After an entire months without House, you can believe I was ready for last night’s two-hour premiere. With House checked in to an asylum, season six was always going to take us into new territory and, from the opening scenes, the producers let us know that this was not your typical episode. 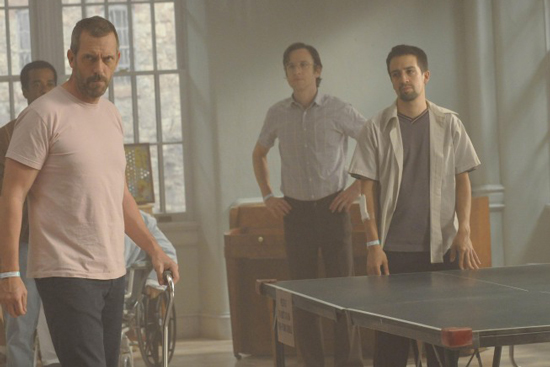 If the removal of Massive Attack's opening music, replaced with Radiohead's "No Surprises" wasn't enough to tip you off, then maybe the washed-out, dream-like detox scene was. Did you watch and are you ready to discuss? Here are some of the things I'm dying to talk about (spoilers ahead!).

Where was the medical mystery? I have to admit, while I loved this episode, I kept waiting for the medical mystery. Every time Annie (the catatonic cello player) was on screen, I would think, "Oh he's going to solve this, surely she must have some rare disease." Then after superhero Steve becomes catatonic, I figured the same thing. And when neither of those panned out, I thought it would be Dr. Nolan's father who would be saved. However once the clock started ticking down, it dawned on me. This is the episode where the person who gets saved is House.

Really, there was so much to this week's episode. In fact, it felt like House the Motion Picture, and I think it did a great job in covering the gap between last season and this one. I have no idea where the writers are taking us, but if the rest of the season is as good as last night's premiere, we're in for a treat!