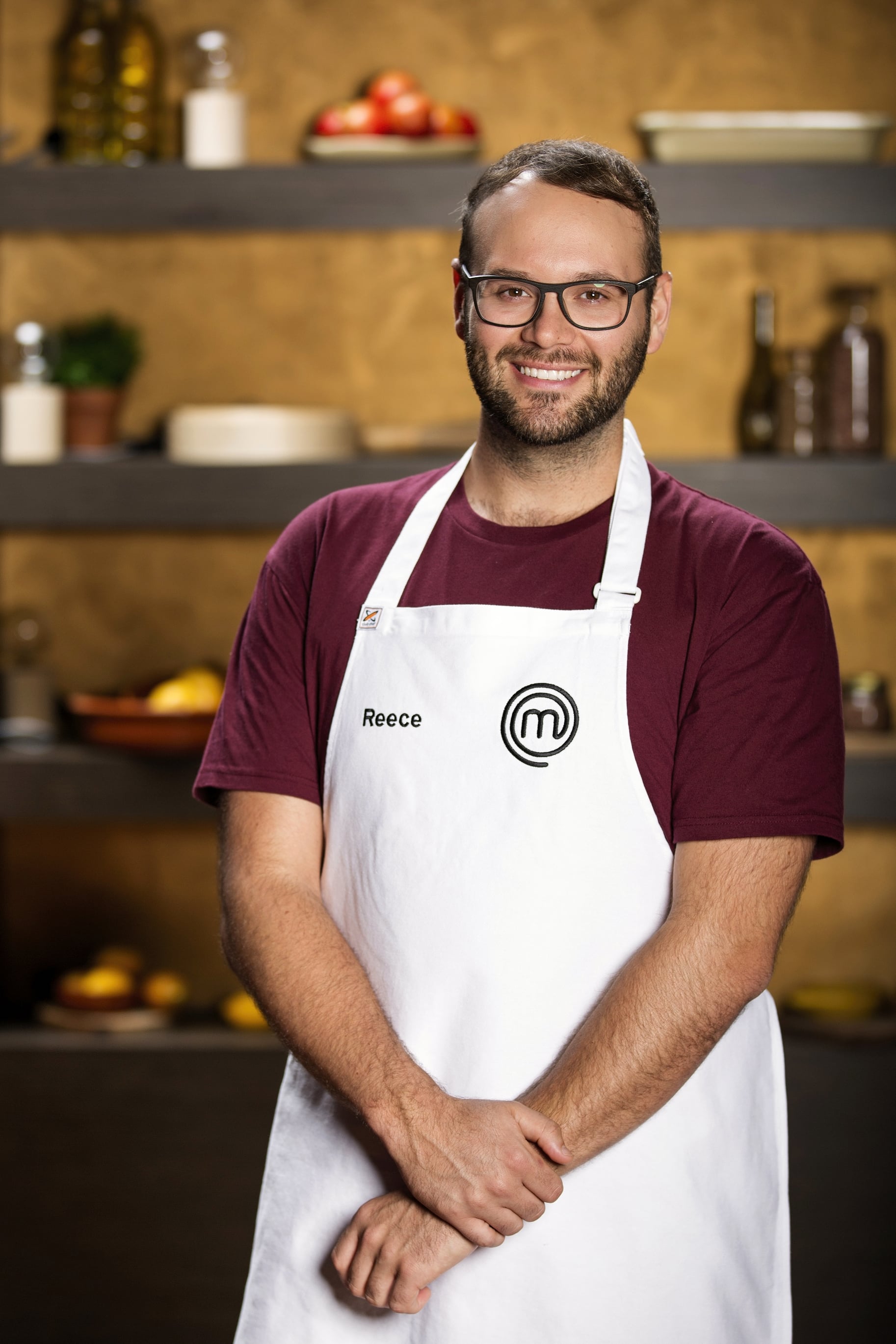 As one of the most creative cooks we've seen this season on MasterChef, it was disappointing to see Reece leave the show on Thursday. Especially being just short of making it to finals week. But rest assured, the dessert king isn't showing any signs of slowing down anytime soon, with plans to host a pop-up dinner in Newcastle, NSW later this year (keep an eye on his social channels!) and some exciting collaborations in the works with season one champion, Julie Goodwin.

Never afraid to push the boundaries with flavours and showcase some left-of-centre culinary flair, there's no denying he's been one of the most enjoyable to watch on the show. Naturally, he also had some great insights to share about his MasterChef experience. Here, Reece chats to us about what he's proudest of, what he saw as his ultimate downfall and training with Sashi.

Related:
MasterChef: Samira Is Proof That a Quiet Confidence Can Go a Long Way

POPSUGAR Australia: I thought you were definitely going to be in finals week!

Reece: Yeah, that's the sense I've been getting on social media. I'm scared I let a lot of people down, but as they say, you're as good as your last cook.

PS: Are you disappointed to have just missed out?

Reece: When it happened, no. It's hard now when you rewatch it . . . But I'm really proud of the fact that one, I made it to top six, because I didn't think I would at the beginning of the competition; and two, that I was really consistent the whole time. That's what I'm really proud about. I was able to get through the competition, make it well into the top 10, and really stand by the people I knew were really good cooks, but still had my style. It's hard when you're the one who didn't get in, but it's fine, it all happens for a reason. I'm really happy with how I performed in the competition, that makes me feel better.

PS: Yeah. I don't think you should be disappointed with letting people down!

Reece: [Laughs] It's hard because since top 10 started, that's when my messages on social media went off like crazy. People were like, oh my god, you are in top three for sure, I knew you'd get to top 10 . . . I think all our dishes in the top 10 have been elevated quite a lot, and people have been messaging saying, you're a freak, you're going to win! Just when the level of support has quadrupled to what you're used to, I can only say thank you because I know I'm not the one. But it's so nice, it makes you feel so good when people send you that. It really justifies why you went on the show and for me personally, someone taking the time to send a message means so much.

PS: How hard was that blind taste test?

Reece: Yeah, I remember even eating a banana . . . Oh my god, when you don't know what a banana looks like, when you put it in your mouth, it's very unpleasant! [Laughs] It's just a cube of mush! I remember that I didn't like it, but yeah, it was so hard. Say with the raw tuna, I felt it was a really hard one to guess. It comes down to knowing the texture of the meat. If it was a visual thing, you would've gotten it straight away. When I tried it, it was very fishy, and to me, salmon is more fishy than tuna, but it still had a certain flavour to it, so I went with salmon. But when you're under that stress as well, plus not seeing and feeling it, it's so hard.

PS: I could see you gnawing at bits of it trying to figure out the texture!

Reece: Yeah, I know in salmon and tuna, they have different marbling and sinew in them. I was hoping they'd cut through the sinew for the tuna, so then I could get a thick bit of sinew, which I knew the texture of in my teeth. I was looking for that and I think from memory, I tried to flake it a bit too, because to me, salmon flakes a bit more. So a lot of it made me want to say salmon, but I was very unsure.

PS: What do you think caused your undoing in the third round?

Reece: To be completely honest, I was very stressed. That was my third time cooking in elimination since the very first team challenge, so if we're talking TV weeks, that's like seven or eight weeks. And over the time of being in the house and such, that's a long time to not cook in that environment. I hadn't had to compete for my spot for so long, you have the stress of not having dealt with that emotion for a long time, and then having to go against Jess, I was like, great, this is my closest friend in the house. I have to cook against her and haven't done this in forever. And then I was still wanting to be different and creative and whatnot . . . I was untrained in eliminations. I wasn't ready, I hadn't had enough experience in it.

If you look back at previous seasons, the people who did really well had built up a strong record of elimination challenges. Ben [Ungermann] was in a few, and so was Diana last year, and even back to season one, Julie Goodwin was in so many, and it gave her a lot of strength to go on and win the competition. I think if you haven't had that elimination experience, it's [definitely] something you won't be used to.

PS: Yeah, I always find MasterChef interesting in that way, in that it's always the person who seems to be at the bottom all the time that goes on to win it.

Reece: Exactly. In the competition when you're living in the house, you always want to be the person on top. You don't want to be the person in elimination, so I would always be so attentive to what I was cooking, because I never wanted to be in an elimination. And because I was able to maintain my consistency, I stayed out of eliminations, but ultimately, it was at my expense, really. In my eyes, that was the reason why I went home that day, because I wasn't thinking as clearly as I normally would.

PS: Do you regret making a savoury dish?

Reece: Not at all. The savoury dish for me was going to be my point of difference and something that would help me win. When we started the top 10, I think I had made more savoury dishes than desserts, and I'd won every challenge I'd made with a savoury or come second, so I had [a good track record]. So I thought I should do it for an elimination, and even though desserts were something I was more comfortable with, savoury dishes had given me a better result.

PS: Did you find the competition taxing in any way?

Reece: Oh, incredibly. I think when you're there for as long as what we were, . . . I remember thinking a day or two before my elimination, that it was only a week or two left until I could go home. If I won, I only had a week or two left. But it's only because the stress levels are heightened. When you get that close, the whole thing changes and it does become a lot harder mentally. Not because of the competition — the competition itself was really set out to let us shine, the production team make it effortless for us — it was more the stresses of being so close, and all that does overwhelm you. You're just like, I really want to go home. A few weeks earlier, I'd said to the judges that my fear of going home had dissipated because I'd been content with what I'd done in the competition and was really happy with myself. So when you consider the stress levels and what you've done, you think, I've done well, so if I do go home, I'm proud of myself.

PS: You've been one of the most innovative cooks in the competition, and I find it so amazing that you're self-taught. How did you get so good?

Reece: It was just a hobby! It was always really fun for me to look at something and be like, I'm going to give that a go, or play around with different things. With me, I don't necessarily look at a flavour combination, I look at something that will be nice for your palette. The judges were saying the other day about a duck dish I'd made with davidson plums, and they'd said, have you ever used davidson plums before? I said no, tried it and it was really sour. And for me, duck goes really well with sour stuff, so it was all just a balancing act in my mind. I'll try this with that or this with that, and it would tend to work, because I didn't necessarily take the biggest risks. If you do look at my dishes, they are out there, but they're not like Callum's last year, who had some really crazy, amazing ideas. I wasn't like that, I wanted to do something different, but when you really think about the flavours, it's just not the most obvious flavour choice.

Even with the pink peppercorn and basil dessert I made, strawberries go really well with pepper, and pink peppercorn is something that's like a floral pepper. So if you cut it right back to just strawberries and basil, they go together; pepper and basil go together; but it's more about elevating it. Utilising an ingredient that may not be often used, using a different technique or the same element, but maybe a different variety of it. Just try to show it off a bit, that was my style. And that's what I do at home, it always excites me when you get something a little bit different. So when I got to go in that pantry and there was an unlimited supply of amazing ingredients, it was like, there's no holding back now!

PS: What advice would you give to future contestants of the show?

PS: Who do you think has the best shot at winning?

Reece: I think up until this point in the competition, Sashi and I have been working together really closely in the house and training each other. I'd help him with desserts, he'd help me with savoury, we were really trying to help each other and had a mutual respect for each others' talent. I want to back him because I've gotten closer to him. I'd love to see Jess win, but I really respect Sashi's talent. For the majority of the team challenges, we've ended up together, so we've done so much together and he's taught me so much. I'm backing him or Jess!

TV
Filthy Rich: A Closer Look at Jeffrey Epstein's Homes Featured in the Documentary
by Hedy Phillips 5 hours ago

The Voice
Everyone Seems to Want to Be on Guy Sebastian's Team on The Voice & Who Can Blame Them?
by Hannah Story 21 hours ago

The Voice
If You're Already Hyped About The Voice, Get Acquainted With Team Delta So Far
by Hannah Story 22 hours ago

TV
As an Office Fan, Space Force Wasn't What I Expected, but I'll Keep Watching
by Grayson Gilcrease 1 day ago
Latest Celebrity
×