This week's episode of Desperate Housewives had a lot of the same themes as last week—Bree can't make up her mind about Orson, Katherine is crazy town and Gaby's parenting skills fall under scrutiny. The trouble continues for Lynette, Tom and their growing family and for once the Bolens stay (mostly) out of trouble. It wasn't exactly filler, but it wasn't the juiciest episode we've seen either. 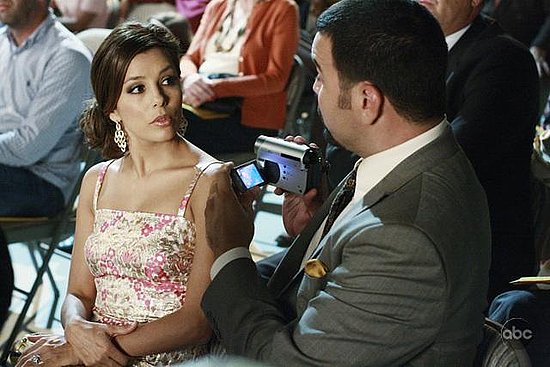 Ready to get into it? Just keep reading.

. Bree: Bree's relationship with Karl comes to a head this week when he decides he's ready to take the next step just as she's dumping him. She's touched when he gives her a brooch that was his grandmother's, though I found it hard to believe that it didn't even occur to Bree to question why Karl wouldn't have given the brooch to Susan, or even to Julie. After talking it over with Susan she decides to give Karl a sex-free trial period to determine whether or not she'll marry him—though Orson is one step closer to discovering her secret when he tries to do Bree a sweet favour.

Gaby: Gaby and Carlos are accused of bad parenting once again when Juanita drops what I assume to be an F-bomb during her school's Thanksgiving pageant. First off, she's seven and this is only the first time she's ever said that? Considering how much Gaby and Carlos allegedly swear, you'd think the kid would have mimicked her parents long before that. I had to agree with Gaby that the principal's punishment seemed a bit harsh for a seven-year-old, though Gaby's plan backfires when she pulls Juanita out of school. Here's the question: if the Solis's are back to being loaded again, can't they hire a tutor to help Juanita finish out the year? Regardless, I'm assuming that Gaby's lack of parental supervision is going to come to a head sometime in the very near future.

Lynette: While Lynette is busy hiding her pregnancy from her friends, Tom starts to embrace the lighter side of uni living, aka gettin' fratty with his new nickname T-Scav. After a couple of incidents with his younger classmates, Lynette heads to a keg party and finds out that Tom is just doing the boys a favour in exchange for test answers. Lynette and Tom square off about lying to get ahead and I'm on the fence about whose side I'm on. Tom has a point about Lynette needing to get off her high horse, but her actions still seem more justified to me than his do.

Susan/Katherine: Ugh. Is anyone else sick of Katherine yet? This time around she demands that Susan and Mike let her back into their social circle, threatening to sue Susan for shooting her if they don't oblige. Then she suddenly has a leaky faucet at 11p.m. and Susan discovers Katherine's ulterior motives when she sees the rose petals and bubble bath all set up in her den of seduction. I was glad that by the end Susan finally decides not to take any more of Katherine's blackmailing.

Angie: When Katherine isn't harassing Susan, she's busy barging into the Bolen house—you'd think with all the crime that Wisteria Lane has seen, someone would lock their doors every once in a while. Katherine is displeased when Angie doesn't want to be her new BFF and partner in crime, so she comes back later with a pineapple upside down cake and of course gets an earful. By the end of the episode, it seems like Katherine is on to Angie's lie about her mother's death (not to mention how sketchy it is that the Bolens have a pre-paid cell phone). Is it possible that Katherine is shaping up to be even more dangerous than the Bolen family? At the end of the episode Angie is implicating Katherine in Julie's attack, which to me is pretty much proof that Angie may have done it herself—perhaps to get back at Julie for sleeping with her husband. What'd you think of the episode? Do you think Angie is behind the attack?