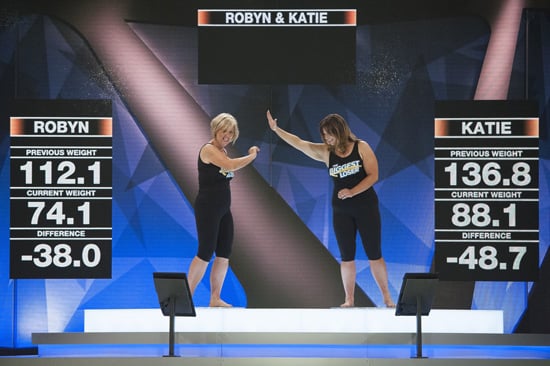 Mother and daughter team Robyn and Katie Dyke have won The Biggest Loser: The Next Generation! The result in the grand finale was super tight, with the Orange Team just beating father and son Green Team, Gerald and Todd. The Blue Team's Richard and Amber were the first of the three finalist pairs to hit the scales, and their combined weight loss percentage was 28.53 percent. Next to weigh in were fan favourites Gerald and Todd, who lost a whopping 94.2kg, or 34.72 percent of their combined weight. It seemed like they had it in the bag until Robyn and Katie stepped up to the scales — the Tasmanian mother and daughter lost a total of 86.6kg, or 34.79 percent of their combined weight, giving them the title of The Biggest Losers for 2013 and the grand prize of $200,000.

The remaining two teams didn't go home empty-handed, though. As the team that placed second, Gerald and Todd were awarded $30,000, while Richard and Amber received $10,000.

Congratulations to Robyn and Katie!