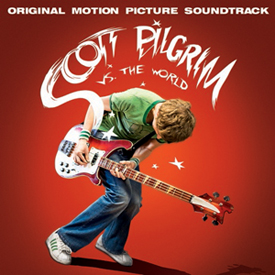 This week's exciting, badass movie release Scott Pilgrim vs. the World brings with it an exciting, badass soundtrack. In the film, Michael Cera plays the title character and bassist in the band Sex Bob-Omb, and even though that band is fictional, their songs are not. They're courtesy of Beck, who infuses original tracks like "We Are Sex Bob-Omb" and "Summertime" with real rock-star cred. The soundtrack features more of that from other artists too, like Frank Black's tribute to the movie's leading lady, "I Heard Ramona Sing."

But perhaps the most download-worthy song on the soundtrack is one that's featured prominently in the movie: "Black Sheep." It's the gorgeous, addictive contribution from Metric (performed by another fictional band in the flick). The standout tracks continue: there's a particularly awesome cover of Sade's "By Your Side" by Beachwood Sparks and the sexy "Sleazy Bed Track" by The Bluetones. The movie also makes use of previously existing songs that fit the tone, like the dreamy, several-years-old "Anthems for a Seventeen-Year-Old Girl" by Broken Social Scene and the decades-old—and achingly appropriate—"Teenage Dream" by T. Rex.