Did you remember to vote for who you want to be nominated for this year’s TV Week Logie Awards? Lines closed a few weeks ago and now the votes have been tallied, with nominees being announced this Sunday afternoon at The Green Room at Quay at The Rocks in Sydney. It will be the first time the nominees have been revealed before the magazine hits newsstands on Monday and will be timed so it fits in Channel Nine’s 6 p.m. news bulletin. It has also been confirmed that Shane Bourne will take the hosting reins of Australian TV’s night of nights, after his name was attached to the gig a few weeks ago. He said, “It’s an honour to be following in the footsteps of such television luminaries as Bert Newton et al — and the timing couldn’t be better. I’ve always enjoyed myself immensely at the Logies, and since the chances of a nomination coming my way this year look pretty slim, I figure it’s not a bad way of making sure I score an invitation.”

Award Season
We Want to Be at the Schitt's Creek Emmys Party — Don't Worry, They're Being Safe!
by Amanda Prahl 1 hour ago

Award Season
Ramy Youssef Recorded His Socially Distanced Emmy Loss, and We Don't Know Whether to Laugh or Cry
by Kelsie Gibson 1 hour ago

Award Season
Catherine O'Hara Just Won an Emmy For Schitt's Creek, and Her Speech Was Full of Moira-isms
by Karenna Meredith 1 hour ago 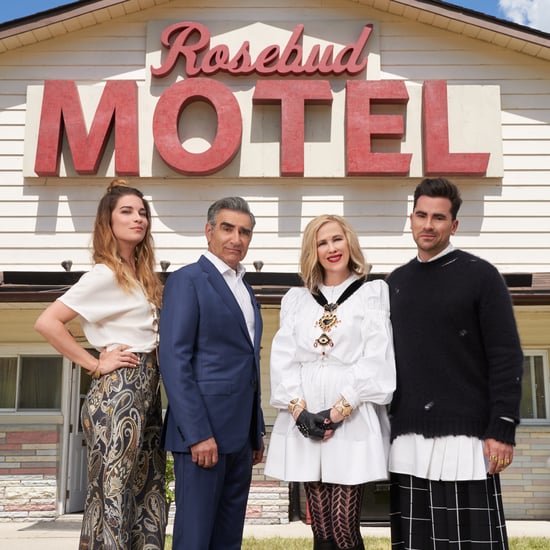 TV
It's Written in the Stars! Here's Your Schitt's Creek Counterpart, According to the Zodiac
by Stacey Nguyen 3 hours ago

Music
Wondering Why You Recognise That Scary Music in Ratched? It's Pulled From a Classic Thriller
by Hedy Phillips 4 hours ago