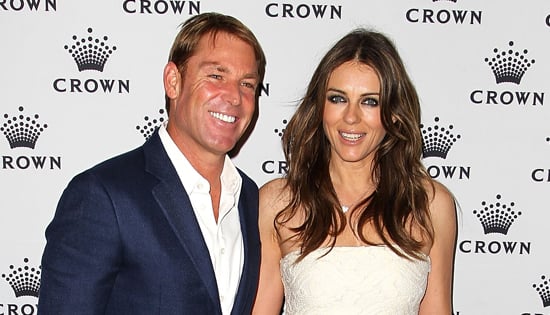 Shane Warne and Elizabeth Hurley have both taken to their Twitter accounts to make social media statements about their relationship status. Over the past week there have been reports that the couple have split, but according to Shane’s tweet from last night, media reports are “absolute rubbish.” He admitted that he and Elizabeth are “sorting through some (private) issues” but are “not throwing the towel in yet.”

Some of the reports re EH & me r absolute rubbish. Yes we're sorting through some (private) issues. But we're not throwing the towel in yet

Elizabeth’s tweet, which came about 30 minutes before Shane’s, was a little more cryptic. She thanked fans for respecting her silence on Twitter and said what she’s currently going through is “too raw & personal to share right now.”

Speculation came about because Elizabeth had been spotted recently without her blue sapphire engagement ring, while other reports said Shane was spending a lot of time with his ex-wife Simone Callahan, who’s the mother of his three children. Splitting time between Australia and UK is apparently another issue. Shane and Elizabeth got engaged in October 2011 after first being linked in December 2010.