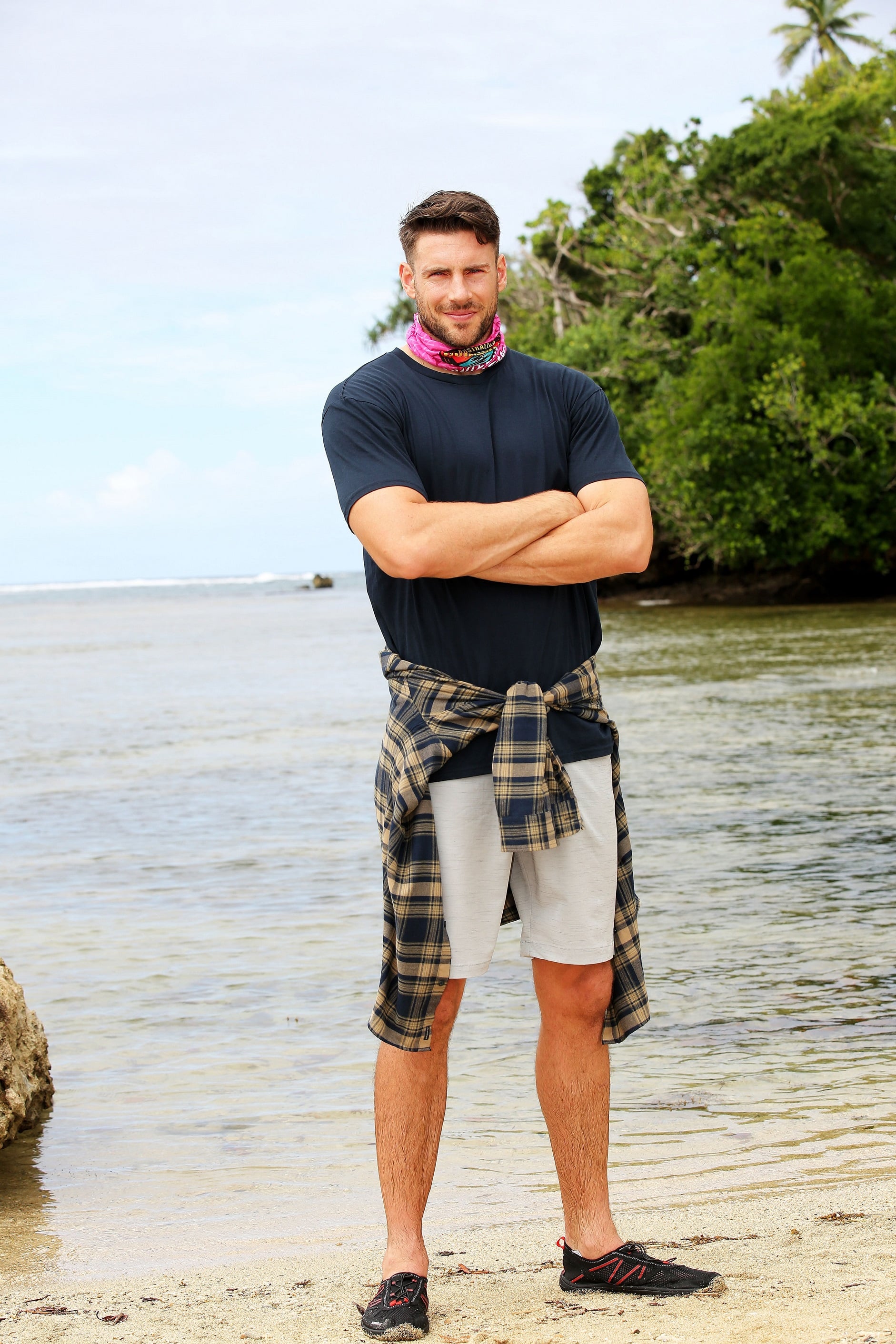 Shaun Hampson was locked in a fierce rivalry with fellow contestant David Genat for much of his time on Australian Survivor. The former professional AFL player gained an instant enemy when David now infamously swapped a fake idol he'd constructed with Shaun's real one. Upon discovering the deceit, Shaun became hellbent on getting David out, and the tension all came to a head when the pair were the last two standing in a heart-stopping immunity challenge. With David eventually securing the victory, Shaun was sent packing due to his status as both a physical and social threat.

Below, Shaun chats all about that fake idol, his regrets in the game and what playing Survivor is really like.

Related:
According to My Research, This Is the Key to Winning Australian Survivor

POPSUGAR Australia: Hey Shaun! Sad to see you go. How did it feel to relive it all last night?

Shaun: It was surreal! I obviously knew what was coming and exactly how it happened, but my heart was still racing. Watching that immunity challenge back knowing how disturbing and uncomfortable it was really rattled me. It was like I was doing the challenge all over again, my heart was racing and I was sort of struggling for breath. It was bizarre! I think a few of us have got some scars left over from that challenge.

PS: During tribal council you really tried to take the target off your back by highlighting what a threat Luke is, do you feel you did all you could to try to save yourself?

Shaun: In that moment [at tribal council] I do think I did all I could. But prior to that, I knew I got along with Janine and Pia well, and I knew that they'd expressed interest in working with me and that they had told me about their distrust for Dave, so I just wish I was more proactive post-merge about working with them. I wasn't as proactive as I should have been, so when it came to tribal council and pre-tribal council around the bonfire, I was really on the defence. I did get everyone on board around the bonfire and the plan was Luke. But, then Janine had a change of heart between the bonfire and tribal, and she managed to sway the vote to me at tribal, which I felt like was treated as the safe vote.

PS: Yeah, it's a bit surprising considering Janine had shown she was interested in working with you when she told you about Dave's fake idol, but it seems she changed her mind . . .

Shaun: Yeah, I legitimately think if I had won that challenge then Dave probably would have been the one we voted for, whether he played an idol or not. Janine certainly had expressed that distrust between them, and that's why they tried to bring me in, so like I said, I wish I was more proactive about that.

PS: Why do you think your closest ally Daisy voted for you, was it just so she'd be on the right side of the numbers?

Shaun: Absolutely. That's one thing I'd always say to John, Daisy and Baden, that in Survivor you should always be on right side of the vote. It's Survivor 101. If you've got the numbers to pull off a blindside, like last night with Luke, then you go for it. But if you definitely don't have the numbers, then don't just throw out a token vote for the sake of it. She did the right thing last night because they didn't have the numbers, and if I was in their shoes I would have done the same thing. I saw so many comments on social media like, "I can't believe she voted for you," but there's no hard feelings whatsoever.

PS: We have to talk about Dave and the fake idol. You were understandably mad at the time, how do you feel about that move and Dave in general now in hindsight?

Shaun: I love Dave! Out on the island we got along fantastically, and since the game finished I've probably chatted to him more than any other contestant. We get along really well, and even just a few days ago we were talking about the game together, we're both huge fans of the show. With him giving me the fake idol, I'd wanted to play a bold and brave game, so doing an idol switch like that was a move I thought I could have had on my resume.

I was so surprised that it was fake, because I kept thinking to myself, "nobody's going to switch a fake idol because it immediately puts a huge target on them." It's like yeah, he got an idol out of it, but he gained an enemy that is absolutely gunning for him. It's a double-edged sword. Regardless, it was a good ballsy move by him, and as a fan of the show I completely respect it.

PS: Talking about your game more generally, is there anything you'd go back and do differently?

Shaun: Yeah, I think unless you win then it's natural to have regrets, I certainly do. Hindsight's fantastic, in hindsight I wouldn't have switched the idol, and I would have tried harder with Janine and Pia post-merge. That was a relationship that was just waiting to be built upon, and I think we could have worked really well together going forward.

Survivor's not as easy as it looks, even for someone like me who's a super fan who's seen almost every season. A few days before I was voted out, we were all just stuffed, we barely even left the shelter. We were starving, and every time we got up we got these crazy head spins because we had no food whatsoever. So it was hard just to get up, be proactive about the game and go chat to people. So stuff like that makes the game feel a lot different to what you see on TV.

PS: We didn't get to see too much of you in the early pre-merge due to the Contenders winning a lot, so what was your strategy going into the game, and do you feel like you stuck to it?

Shaun: No, I don't think I stuck to it! My strategy going in was just to stick to the middle as much as I could, you don't want to stand out for anything too much. You don't want to be the one with too much power in the tribe, the one who's too good at challenges, too nice or not nice enough. You just want to hang around the middle, but that's really hard to do when a lot of people are trying to do that as well. When it came to challenges, I was just enjoying them too much, and I'm too competitive to not give my all. There was a heap of stuff that wasn't seen because we didn't go to tribal council, but there were two clearly defined groups: Daisy, John, Baden and I, and then Harry, Sam and their crew. Had we gone to tribal council, I don't know what would have happened. I was certainly frenemies with Harry early on, but once we got to merge I was keen to work with him.

PS: How did it feel to be the first member of the jury and the only one at jury villa for a couple of days?

Shaun: It was disappointing, because I really wanted to win the game, but it was also great to be away from everyone for a few days and have the whole resort to myself. It was really refreshing, but at the same time, I didn't have anyone who I could decompress with. So when the next person joined me, it was really good to talk to them about our games and what we would have done differently. That was really therapeutic. I feel sorry for the person who finished third, because they only got one or at most two nights to jury villa to decompress, which wasn't enough. The game does a number on you mentally, it's tougher mentally than it is physically.

The morning after I got voted out, I was having breakfast on my balcony and I was looking around, and I realised that I was looking for an idol. I was out of the game, but I was still in that mindset. Whenever I saw two people talking, I'd be like, "are they talking about me?" and whenever I saw papayas in trees I'd want to go get them. I didn't need to do any of that anymore, but it was really hard to come out of.

PS: What was the highlight of your time in the game?

Shaun: The challenges. I loved them, it was like being a kid again on the world's biggest playground. I pushed myself as far as I could, and playing football for 12 years meant I had learned to want to do that. I also did absolutely love the strategic side of the game, and really enjoyed talking strategy.

PS: Who do you reckon has what it takes to win?

Shaun: I think Luke and Dave certainly do, they are both unbelievable players, as is Harry. I'm sort of rooting for Harry at this point. But you know what, there's not many people out there who I don't think have what it takes to get to the end. Even someone like John, who had no interest in the strategy part of the game, is starting to realise now how important it is. Even he's got what it takes. From being out there with them all, I'd say everyone left there now is worthy.

TV
Despite Also Being Terrifying, The Haunting of Bly Manor Isn't a Sequel to Hill House
by Mekishana Pierre 6 hours ago

TV
Who Is the Sun on The Masked Singer? We Have Some Bright Ideas
by Kelsie Gibson 6 hours ago