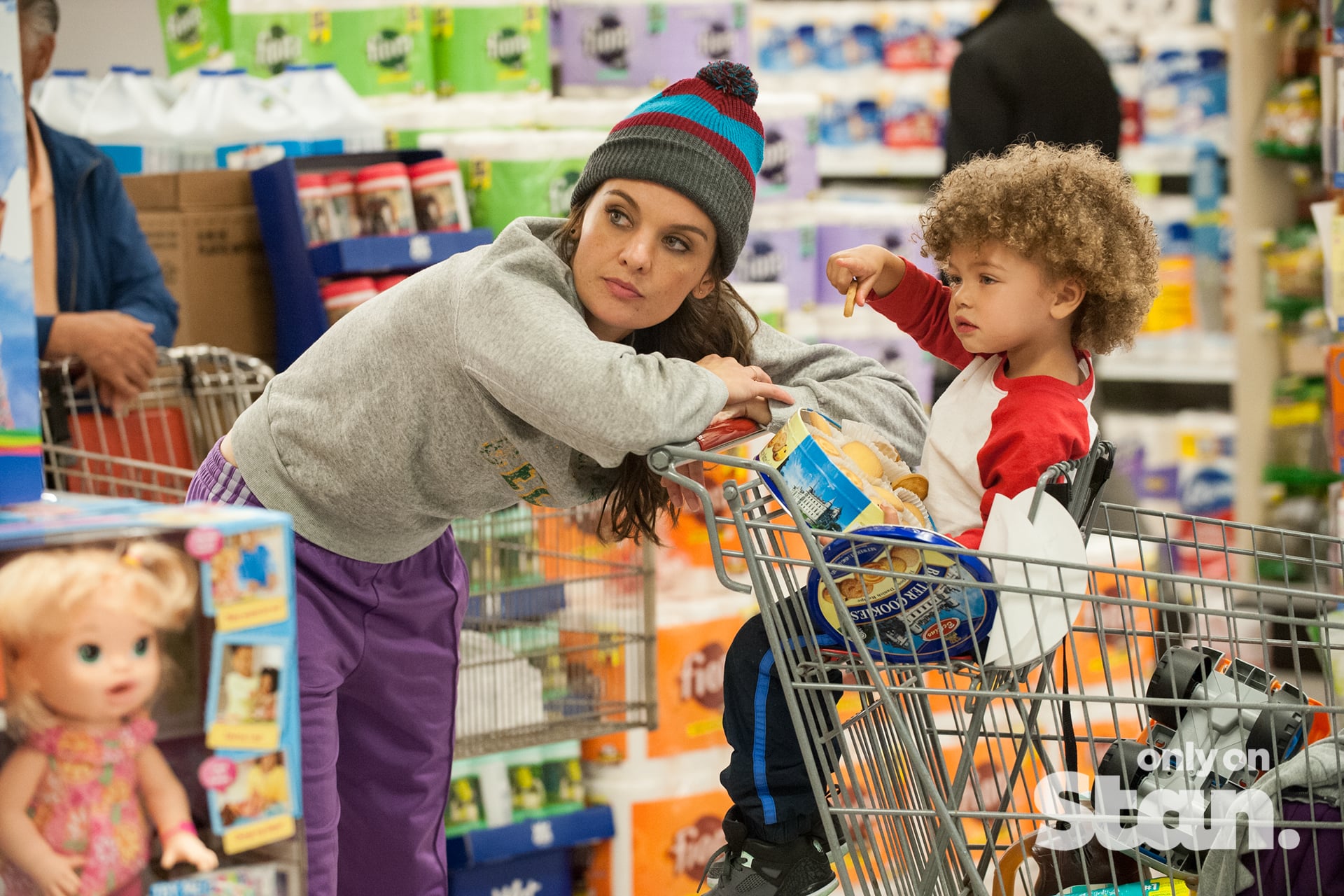 When Sex and the City debuted on TV screens in 1998, it was celebrated for making the wildly sexual lives of single women public. Though it had happened before (see Melrose Place for some real '90s nostalgia), it hadn't been quite so graphic, focused and with so few men taking up the storyline. With all its critics and detractors, it became iconic quickly — because it explored territory that felt fresh.

That's exactly how I feel about Stan's new show, SMILF. As a coupled-up 30-something without kids, I've never given much thought to what life might be like with child — or more specifically, what it might be like being a single parent to a child. Let me tell you this: SMILF illustrates it very colourfully for those of us who aren't in the know.

Related:
SMILF Is Your New Favourite Show — Get to Know the Cast!

The story follows South Boston woman Bridgette Bird, who's very busily navigating life as a single mum to gorgeous toddler son, Larry. Her life is best summed up by one word: frantic. If she's not in the bath with her kid, feeding him, reading him to sleep or entertaining him, she's running between her tutor and nannying jobs, dropping Larry off at her deeply dysfunctional mum's house, or simply trying to get enough food into her own mouth to survive.

Sex? A personal life? Well, those things don't exist — and we can only imagine how true that rings for a lot of single mums and dads out there.

We quickly learn that Bridgette hasn't slept with anyone since giving birth to her son, and she's consumed to the point of obsession about the state of her vagina.

In episode one, she sprints to the corner store to pick up some junk food while Larry is sleeping — you hold your breath the entire scene because what if Larry wakes up, walks to the door, miraculously unlocks it and disappears forever in the space of three minutes? Stranger things have happened — and she runs into an old friend of hers. He seems really happy to see her and after their run-in she heads back to the apartment (Larry is safe! Phew!) and texts him to see if he'll come over for sex. To her surprise, he does and we won't ruin what happens next for you, but it's the kind of funny story that makes you question who you are as a human being for laughing. In other words, it's the best kind of funny.

While humour makes up a huge part of this show's appeal, it's all tinged with a lesson — it feels like there's a harsh truth tucked away in between all the giggles it elicits. We're hit with the first one quickly, in the opening scene: Bridgette is playing basketball with strangers on a public outdoor court. She heads over to the bubbler for a drink (how retro) and a handsome man she was competing against approaches to compliment her play; it's clear he's angling for a date. Suddenly, his pick-up lines are interrupted by Larry's crying in the side of the frame. Bridgette moves over to pick her son up and the guy, who'd been pretty bloody keen all of two seconds ago, can't get outta there fast enough. "Woman with a baby? Too much baggage!" the scene screams. It's brutal but let's face it, it's probably not a stretch. 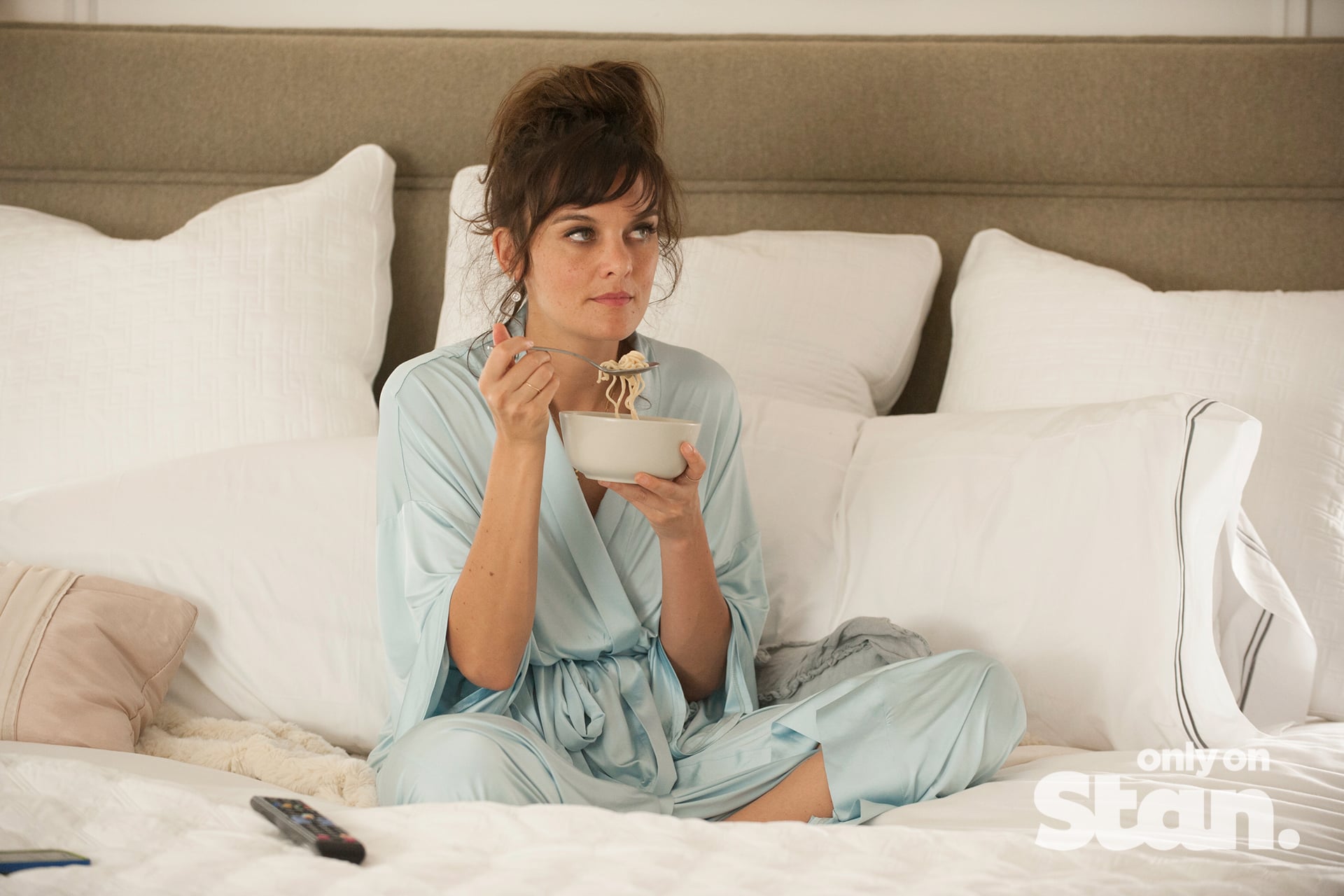 It's moments like that one that make SMILF feel fresh. Hot-mess mums aren't exactly new to entertainment (shoutout to the team behind Bad Moms for making an entire movie on the topic) but watching a hot-mess single mum navigate sex and dating this truthfully feels like a slice-of-life story we haven't seen enough of.

SMILF fills a void in my TV-watching routine that I hadn't even realised was there, and that's what I loved most about it. Frankie Shaw, who wrote the story, directed it and stars as Bridgette, has created a character and world that I don't want to leave. Miguel Gomez plays Bridgette's ex-partner, and their totally civil co-parenting relationship feels refreshingly supportive. His girlfriend, played by Australian actress Samara Weaving, made me laugh out loud with her Insta-famous nipples and painful one-liner about Bridgette's "gritty quality." Rosie O'Donnell is excellent and incognito as Bridgette's mum. Connie Britton is a welcome face in any TV show.

Related:
The Girlfriend Experience Has Some of the Boldest Storytelling on TV Right Now

When I watched the first few episodes, I laughed for a vast majority of the time — even in those moments when it felt like I really shouldn't. The last scene of episode one in particular was shocking, but it was handled lightly and with humour. It completely confused my emotions (mi scusi, are we allowed to laugh at this?), and I can't remember the last time a TV show made me want to scan the room to gauge the reaction. I'd like more, please.

You can catch SMILF exclusively on Stan.com.au — episode one is available now, with new episodes dropping every Monday from November 13.

TV
Where Is Selena's Husband Chris Pérez Now?
by Camila Barbeito 22 hours ago

TV
How Selena's Family Was Involved in the Production of Netflix's Selena: The Series
by Camila Barbeito 1 day ago

Celebrity Style
Jenna Lyons on Her New TV Show and the One J.Crew Piece She'll Never Get Rid Of
by Sarah Wasilak 20 hours ago