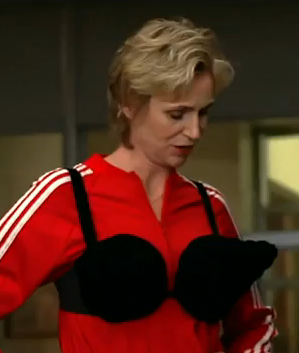 It's the episode we've all been waiting for: Glee does Madonna! The Material Girl has just announced news of directing and designing projects, but I'm more excited about her upcoming turn to the Gleek-side. The ep, which airs in the US in April and should hit our screens later in the year, features the Cheerios and the Gleeks performing Madonna songs—and Madonna songs only.

Entertainment Tonight got a sneak peek, with glimpses of Sue in a cone bra and a snippet of the song "Express Yourself." I'm already making the grandiose claim that this may just be my favourite episode of the Golden Globe-winning show yet, especially if it comes with a cameo from the superstar herself. Keep reading to check out the video for yourself.