It's an odd thing to realise the film you're watching is the one that may end up defining your generation, but that's the case with The Social Network, the David Fincher film inspired by the founding of Facebook. Set in 2003-04, when Mark Zuckerberg (played by Jesse Eisenberg) put the plans in motion for the ultra-popular website, it almost seems like an event too recent to dramatise. However, screenwriter Aaron Sorkin does so much with his whip-smart script that the film transcends its own label of merely being "the Facebook movie." 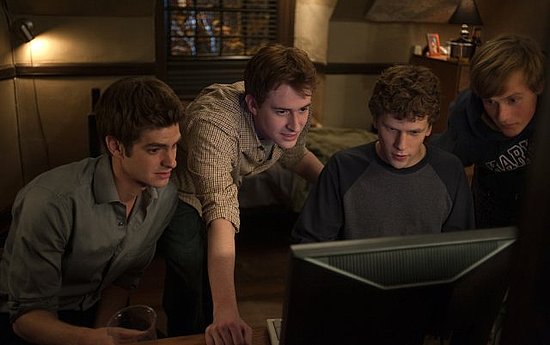 The Social Network is the mirror held up to our current Internet-driven culture, and as users of the ubiquitous site (500 million members and counting), we might all think we already know plenty. But the combination of Fincher's usual expertise and Sorkin's writing makes the story fascinating. To find out why I think The Social Network is a must see, just read more.

We meet Zuckerberg on the Harvard campus in 2003, and once he alienates his girlfriend via his personality and his blog, he starts putting together the digital pieces for Facebook. He lands in trouble for hacking into Harvard's computer system and crashing it with his first venture but attracts the attention of his fellow students, including a couple of wealthy twins (both played by Armie Hammer) who want to use Zuckerberg's skills for their own website. Fast forward a couple of years, and the narrative of the Facebook genesis is retold through two lawsuits—one brought on by those twins and one from his former friend and original cofounder Eduardo Saverin (Andrew Garfield).

Through these flashbacks, we find out how eventual billionaire Mark became the target for litigation, as well as his motivation for success. Through Sorkin's words and Eisenberg's fine portrayal, he's presented as a twitchy boy genius who's actually not so concerned with money or getting to the top—he just wants to be liked. To be clear, though, Sorkin's Mark barely garners sympathy by being a nerdy outsider; he's sarcastic and cutthroat, eventually utilising his talents because he wants to be cool.

Facebook isn't just Mark's baby; Eduardo is the savvy, trusting best friend forced out of a company he helped build. In that role, Garfield is endearing and effective, and his performance is the most memorable. Justin Timberlake is adequate in his part of Svengali-ish Sean Parker, but his presence is more often a distraction than it is an asset to an otherwise outstanding film.

I can see why Sorkin was so intrigued by Facebook's beginnings, aside from its cultural relevance; it's the business of friendship that The Social Network revolves around, and how it's not always a beautiful—or real—thing.