The value of time is a universal theme: we all wish we had more of it, we wish we could turn it back, we're all trying not to waste it, etc. In Time takes this theme and runs with it, taking us to a futuristic world where currency is no longer measured in dollars and dimes, but in hours and minutes. The rich can live forever while the poor wake up each morning unsure if they'll still be around to see the next. It's an intriguing idea, but the finished project didn't leave an impact on me beyond memories of Justin Timberlake running and constantly looking at a time clock branded on his arm. 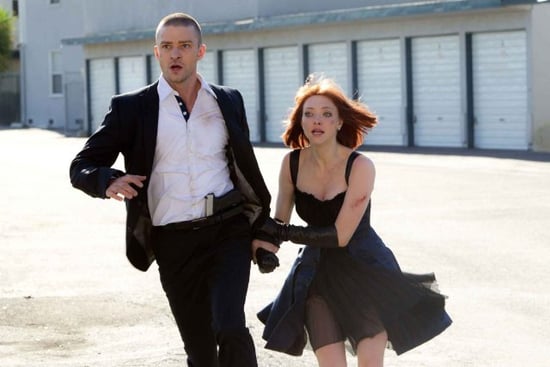 Timberlake's character, Will Salas, is one of the aforementioned poor — he essentially lives in the ghetto, as the government has divided everyone into "time zones" so the rich can stay isolated from the poverty-stricken individuals that are going to desperate measures to steal time from each other. Will spends each day struggling to garner enough minutes to keep himself and his mother (Olivia Wilde) alive. Isn't Wilde a bit young to play Timberlake's mother, you ask? Why, that's because nobody ages past 25, which means the cast is made up of fresh-faced actors like Alex Pettyfer, Matt Bomer, and Vincent Kartheiser — save for Johnny Galecki, who, even as an alcoholic, looks so haggard and out of place that you wonder how he made it into the final cut of the film.

After a chance meeting with a rich man who's tired of immortality, Will finds himself with more time on his clock than he ever imagined. He barely has enough time to head to greener pastures before his inheritance makes him a target by the "Time Keepers," who are basically just cops trying to keep the rich and poor in their separate zones. With the Keepers on his trail, Will takes a hostage in a rich young woman named Sylvia (Amanda Seyfried), and begins literally running for his life.

To see why In Time is more silly than suspenseful, just read more.

It's hard to take a movie seriously when it's inundated with laughable dialogue and ridiculous elements. I could easily make a drinking game for every wordplay on the theme, from questions like "Do you come from time?" to "That's a nice watch" — but I'm not sure anyone would survive. The eye rolls don't end there either; so much of the movie makes little sense (e.g. you can clear someone's entire clock in a simple arm wrestling match), but the plot isn't nearly exciting enough to forgive all that.

The most entertaining part of the film is watching Sylvia transition from a prissy rich girl to the Bonnie to Will's Clyde. Her kidnapping sets her free, and Seyfried does a fine job of pulling out one-liners and making comical moments of Sylvia's criminal "firsts," like firing a gun for the first time. Together, she and Will channel the spirit of Robin Hood, stealing as much time from the rich as they can, only to give to the poor in a mission to balance the government's class system.

In Time tries to push so many agendas that you're not even entirely sure what to take away from the movie in the end. Is it about the importance of rebelling against a corrupt government? Living your life to the fullest and making every second count? In some ways, it feels like the filmmakers were so busy trying to jam a message down our throats that they neglected to make a film that's worthy of its compelling premise.