The fact that Tinker Tailor Soldier Spy is a well-crafted mystery that allows you to play detective yourself would be enough for me to say it's good, but the fact that it's so superbly acted makes it great. In the 1970s-set film, Gary Oldman plays George Smiley, a former intelligence officer who's summoned out of retirement to help root out a mole in Britain's Secret Intelligence Service, AKA "the Circus." Oldman leads an ensemble of incredible actors like Colin Firth, Tom Hardy, Mark Strong, Toby Jones, and up-and-comers like Benedict Cumberbatch. 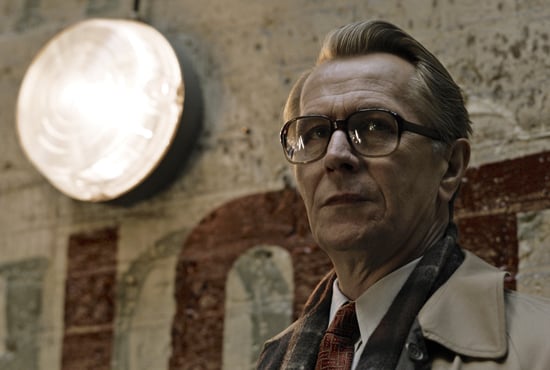 The men play British agents in the Circus devoted to monitoring the intelligence between Russia, Britain, and the US during the Cold War. The agents have a long history of working together, but each one is potentially the double agent working for the Soviets. As Smiley unearths clues to reveal the identity of the mole, the film makes you trust and doubt each of the suspects equally with an absorbing story that's worthy of its fine cast. To find out why I enjoyed the film, just keep reading.

Though there are lots of people to keep track of, the characterisation is so well done that you're invested in all of them. Each man's motivation and relationships are explored, giving the film a surprising amount of emotional heft. When you find yourself caring about each individual storyline, there's a deeper amount of satisfaction because you're not just getting answers, you're making emotional connections. These are men, who are highly intelligent and professional, but they're not cold, calculating spies; they're three-dimensional men who put their lives into their jobs and country.

The cast members each provide an indispensable contribution, both as valued members of the team, and as individuals. Firth is reliably solid, Strong emerges as a poignant standout, and Hardy gives a surprisingly nuanced performance as a wild card and critical piece of the puzzle. The supporting actors have another important role in providing leading man Oldman with a foundation for a brilliant performance that's intense even when he's thinking silently.

My only quibble is with the pace of the film; some developments and details are presented so quickly and subtly that you worry you might have missed something, while other parts of the film move at a snail's pace. But the plot is so tightly woven, and the film culminates in an exhilarating final act that's so gripping your fingernails will be worn down to nubs.