It's a story that we've seen before: spaceships land in major cities around the globe, wreaking destruction and threatening to kill the sole survivors of the human race. But even though the premise has been done to death, it's still kind of cool to watch in this trailer for Skyline. 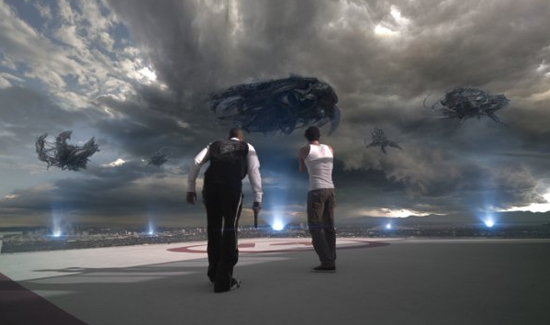 The film stars Eric Balfour (along with Donald Faison and Brittany Daniel in supporting roles), but before you go disregarding it due to its lack of huge star power, check out the special effects. The imagery is thanks to filmmaker brothers Colin and Greg Strause, who—after sharing a background in visual effects on every movie from Avatar to 2012—took on this project using their own equipment. If it sounds low-budget, that's because it was. In fact, the cost was rumoured to be only $10 million (chump change for Hollywood wallets). Even so, you'd never guess it from the looks of the preview. Is it a little cheesy? Sure. But the scene with floating bodies in the sky gives me chills. Get a peek when you read more.