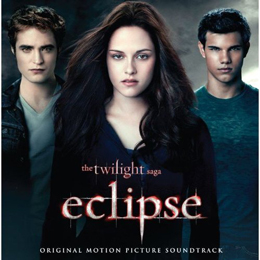 The Eclipse soundtrack is officially out and if there's one thing I can tell you, it's this: ignore the preconceptions that a Twilight soundtrack must, by definition, be moody. I mean, sure, the New Moon soundtrack was a complete mood-fest, but it was also satisfyingly solid. And Eclipse's music shares a lot of similarities with its predecessor—Alexandra Patsavas once again supervised and each song was written exclusively for the film. But unlike New Moon, this is far more upbeat and, at times, much lighter.

Leading the pack of the lively tracks is Cee-Lo Green's "What Part of Forever", which is hands-down my favourite of the entire soundtrack. It's an unexpected twist on the whole undying love thing—the theme is there, just delivered in a more celebratory package. Vampire Weekend's "Jonathan Low" and Fanfarlo's "Atlas" also provide some buoyancy, as does the bonus track "How Can You Swallow So Much Sleep" by the relatively unknown Bombay Bicycle Club. I even find the Muse contribution "Neutron Star Collision" to be surprisingly euphoric. But let's be real, there's still plenty of broodiness on this album.

If you're looking for a grand ballad, look no further than Sia's "My Love." It's impossible to listen to this song and not imagine Robert Pattinson staring into Kristen Stewart's eyes on screen. Giving us a very dramatic Bella perspective is Florence and the Machine's "Heavy in Your Arms." And rounding out my favourites are songs from the artists I didn't expect to see on the soundtrack (I love thinking about Jack White thinking about Twilight). He and The Dead Weather give Eclipse their blessing with a typically hard and heavy "Rolling in on a Burning Tire," while Band of Horses doesn't stray from its own style for "Life on Earth," nor do The Black Keys for "Chop and Change."

Will you be taking a bite of the soundtrack? If you do, let me know your thoughts!