Kevin Williamson and the cast of The Vampire Diaries satisfied my appetite for spoilers—but thankfully, didn't give too much away—at their rowdy (and a little raunchy) Comic-Con panel. Ian Somerhalder and Paul Wesley received equally loud hoots and hollers from the crowd and Nina Dobrev admits that she can't pick a favourite between the two boys either. Not that she has to—Wesley had "Team Elena" written on his hand for the panel and Somerhalder had "Team Katherine"! Michael Trevino (Tyler), Matt Davis (Alaric) and Steven R. McQueen (Jeremy) also joined in on the conversation, so keep reading for season two secrets! 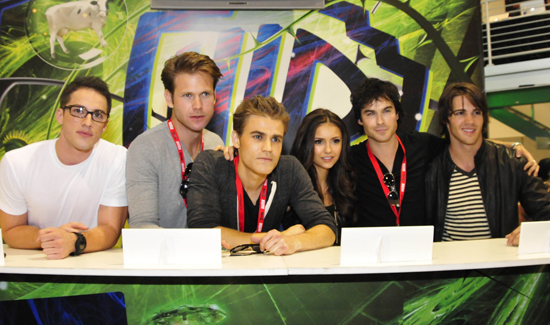