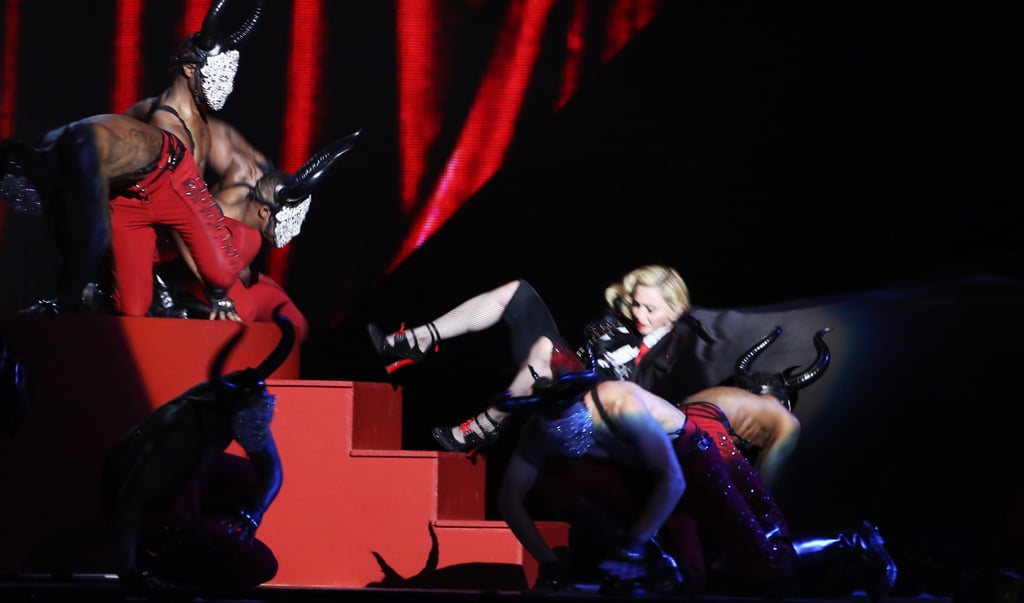 Madonna, Are You OK?! Singer Took a Tumble on Stage at the Brit Awards

Madonna took a nasty spill while performing "Living For Love" at the Brit Awards in London on Wednesday. It looked like she was accidentally pulled backward down a flight of stars while a dancer tried to remove her cape, but she appeared to get back up and continue her set without missing a beat. After video of the incident went viral on social media, Madonna posted a photo on Instagram to thank her fans for their well wishes, writing, "Armani hooked me up! My beautiful cape was tied too tight! But nothing can stop me and love really lifted me up! Thanks for your good wishes! I'm fine! #livingforlove." Madonna's performance was the big finale of the award show, which handed out trophies to Ed Sheeran, Taylor Swift and Sam Smith. Kanye West also performed during the ceremony, and his wife, Kim Kardashian, popped up on stage to present an award. Keep reading for videos of Madonna's unfortunate fall at the Brit Awards. Source: Getty / David M. Benett

Music
Kelly Clarkson Put Her Own Spin on This Ariana Grande Track, and We're Out Here Vibing
by Kelsie Gibson 15 hours ago