Adam Sandler made another movie and apparently invited everyone he knows to jump on board and have fun. And the cast in Grown Ups really does appear to be having a good time in the trailer—I'm just not 100 percent sure I'm right there with them. 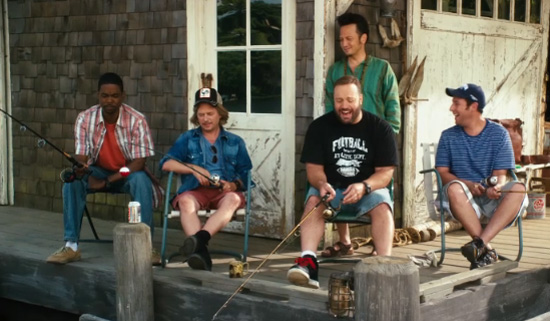 The film follows Sandler and his childhood friends (Kevin James, Chris Rock, Rob Schneider, David Spade) as they reunite one Fourth of July weekend to honour the death of their basketball coach. Sounds kinda like The Big Chill, but as to be expected with a Happy Madison film, it's ridiculously slapstick. I love all of these guys, but the bits in this teaser definitely aren't as roll-on-the-floor funny as I had hoped with such a star-studded cast. (Really, a breast-milk joke?!) But maybe I'm just judging it too quickly. The film opened on Thursday, so take a peek at the video and tell me your thoughts when you keep reading. Will you be catching Grown Ups this weekend?