After seven straight weeks at No. 1 and record-breaking ticket sales in the US, Avatar finally got the boot from Dear John back in February. The Nicholas Sparks romance took in $32.4 million in its debut week in theaters, dethroning the James Cameron box office king and now it's hitting our shores this weekend. 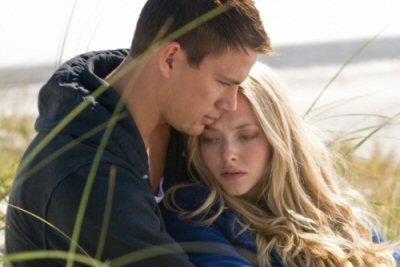 In the film, Channing Tatum and Amanda Seyfried fall for each other one summer while Seyfried's character Savannah is home from college and Tatum's John is home on leave. When they have to leave each other and return to their respective obligations, they begin writing letters to keep in touch, hence the title (it's set in the late 1990s so no email, text or SMS). Normally I would be holding my nose for this schlockfest, but I can't deny the talent of director Lasse Hallstrom, the charisma of the two leads, or the major soft spots I have for The Notebook and A Walk to Remember—both movies made from Sparks books. And there's another bonus: Six Feet Under's Richard Jenkins as John's dad. To watch the trailer and decide if it's going to be a cheesy mess or a heart-tugger, just keep reading.