If religious leaders took issue with Angels and Demons, then Creation is bound to raise an eyebrow or two. Based on the story of Charles Darwin (Paul Bettany), the film follows the theorist as he was writing his famous The Origin of the Species, and the effect that the revolutionary manuscript had on his relationships—especially with his devoutly church-attending spouse (Bettany's real-life wife, Jennifer Connelly). 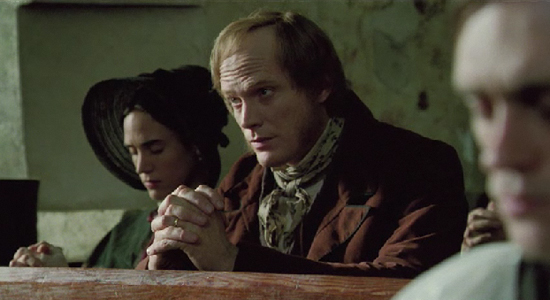 Creation opened this year's Toronto Film Festival with mixed reviews, but after seeing the trailer for myself, I'm curious to check it out when it comes to theatres in 2010. If anything, it looks like it could be a memorable performance from Bettany, who I've loved since A Knight's Tale. I'll admit, I am rolling my eyes a little over the obvious allusions to Michelangelo's "The Creation of Adam" in the preview, but take a peek, and tell me what you think.

Keep reading to check out the trailer.