In the upcoming film from Clint Eastwood, Matt Damon stars as Francois Pienaar, a real-life member of South Africa's rugby team who's summoned by Nelson Mandela (Morgan Freeman) to rally support in the country and unite the racial divide. 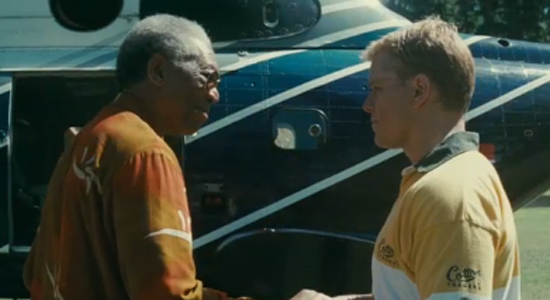 I love Matt Damon, but I'm actually more interested in Morgan's performance in Invictus. It looks like one well-done biopic and it's obviously Morgan's Oscar film—but Matt doing an accent might also translate into a nomination. (Not to mention that many things Clint touches turn to Oscar nods). Warning: If cheering crowd scenes and African singing often play with your emotions, you may get goose bumps while watching this preview. The movie opens on January 21. Check it out and tell me what you think.