Jude Law may be charming audiences right now with Sherlock Holmes — he's even back in Sienna Miller's good graces — but he's about to take a very dark and sinister turn in the thriller Repo Men. The futuristic film tells the story of mechanical organs and a man named Remy (Law) who repossesses them by slicing them out when their owners can't pay up. 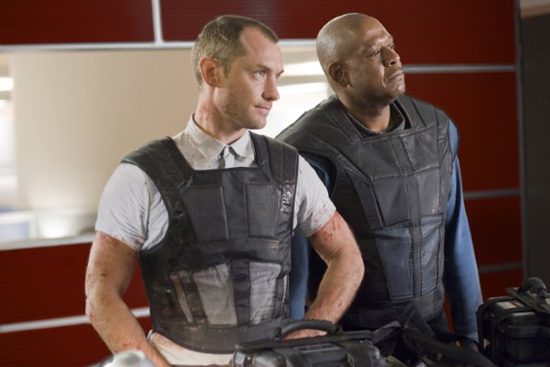 That's right, I said he slices them out. It seems like an interesting sci-fi concept, but I don't know that I necessarily want to watch such a gore-filled story — on a giant-sized screen, no less. Plus I can't help staring at Jude's hair. He has a peninsula shaped hair-growth pattern on his head. Very distracting. And they really want us to believe that pretty boy Jude is sent around to rough people up when they can't pay their bills? Jason Statham I would buy, but Jude...not so much. But the good news is the film has Forest Whitaker and Liev Schreiber in the cast. If you don't mind the sight of blood or Jude's hair, see if you can make it through the whole preview (warning: it's definitely NSFW).