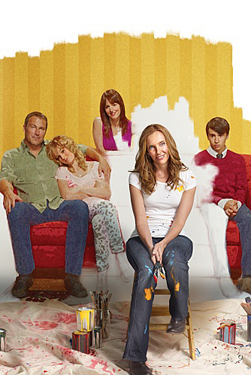 Toni Collette's United States of Tara returns to ABC1 tonight and just when you thought the show couldn't get any more complicated—one woman, four different personas—one of her alter-egos is getting a love interest. To give the quick rundown, there's T, the bratty overtly sexual teenager; Alice, the goody-goody 1950s housewife; Buck, a beer-swilling dude; and appearing briefly last season Gimme, an animalistic (urinating) embodiment of the id. And there's Tara, the woman with dissociative identity disorder at the middle of it.

So who finds love? From the looks of it, Buck is smitten with a bartender (played by Joey Lauren Adams!). But there's just one problem—Buck is actually Tara...who's married...to a man. Another unusual twist: Tara's gay son Marshall (aka "Moosh") is apparently trying to be straight. Really.

I'm pumped to see all the regular players return for the second season—Rosemarie DeWitt as Tara's sister Charmaine, John Corbett as her husband Max, and of course, the wonderful Toni Collette, who won both an Emmy and a Golden Globe for her portrayal of Tara. Add that to writer Diablo Cody's quirky brand of humour (and the introduction of a brand-new alter named Shoshanna), and this is sure to be yet another stellar—albeit, twisted—season. But don't take our word for it. Check out the trailer when you read on.