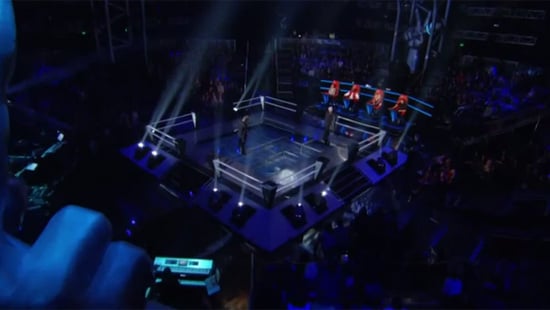 After watching six nights of captivating blind auditions, the coaches on The Voice have filled their teams of 12 and will now have to halve their numbers in the battle rounds, starting on Monday night. Keith Urban, Delta Goodrem, Joel Madden and Seal are faced with the difficult task of letting some of their singers go — but not after we see them ‘battle’ it out in spectacular duet style! (Some critics think viewers won’t be as interested in the battles and that the ratings may suffer, but I love them and think they’re still a huge point of difference for the show.) Not sure how it works? We’ll give you a quick rundown after the jump.

Note: This explanation comes from being at one of the battle show tapings and watching bits and pieces of the US version’s battle rounds. The Voice Australia Battle Rounds commence on Monday night at 7:30 p.m. on Channel Nine.

Award Season
Tyler Perry's Emmys Speech Had a Powerful Message: "We Are All Sewing Our Own Quilts"
by Grayson Gilcrease 12 hours ago

Award Season
Did Schitt's Creek Just Earn the Most Emmys Ever Won in a Single Year? Not Quite
by Amanda Prahl 17 hours ago

Award Season
Mark Ruffalo's Emmys Speech Is a Poignant Reminder: "Fight For Those Who Are Less Fortunate"
by Grayson Gilcrease 17 hours ago