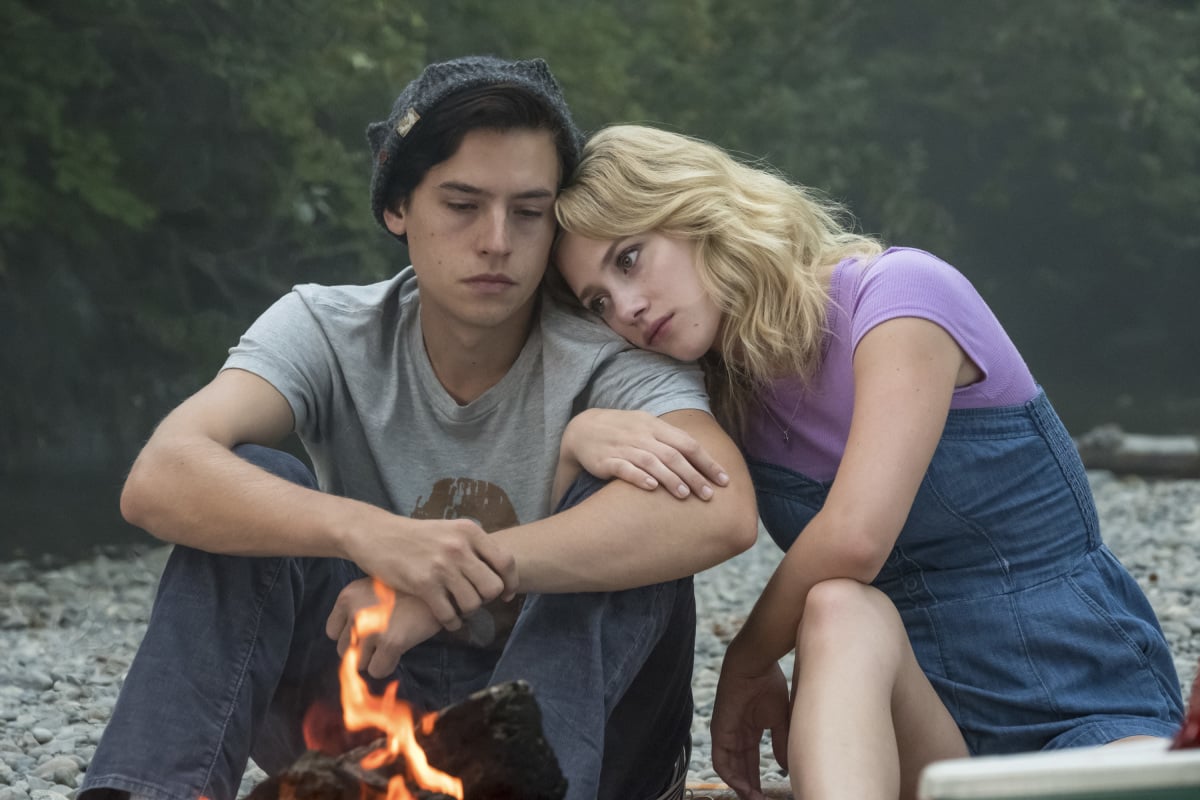 Riverdale's season three finale drops quite a few bombshells. It reveals who the real Gargoyle King is, introduces us to Betty and Jughead's half-brother, and cranks our disdain for Penelope Blossom up to a whole new level. One of the biggest "WTF?" moments happens at the very end when we see a flash-forward to the Spring semester of Betty, Archie, Veronica, and Jughead's senior year.

Instead of them doing homework and anticipating graduation like normal high schoolers, they're standing around a fire in the woods in their undergarments looking all sorts of anxious and terrified. But they're missing a key member of their squad: Jughead. The only sign of him is his signature beanie, which Archie holds on to. After a few seconds of silence, Betty says, "We have to burn all of our clothes, including Jughead's beanie. We'll wash off the blood in the swimming hole. After tonight, we never speak of this ever. Not to each other. Not to our parents. No one. We finish our senior year, we graduate, and we go our separate ways. That is the only way that we don't get caught."

OK, pause. Let's rewind and back, back, back it up a bit. It appears as though they're trying to insinuate Jughead is dead. But, let's be honest — that's probably not the case. The show would hardly be the same without our favourite broody teen. We really don't see the writers killing him off.

What's the deal then? More than likely, the young crew will become involved with some sort of illegal activity and will have to cover it up. Perhaps Jughead is the main culprit of whatever happened, so they're trying to save him from any repercussions. Riverdale showrunner Roberto Aguirre-Sacasa even hinted at this in an interview with Entertainment Tonight after revealing the flash-forward was inspired by suspense novels such as Killing Mr. Griffin and I Know What You Did Last Summer. "We thought, 'Oh, what if what binds our group together isn't just the camaraderie of senior year but a crime that has them at the absolute centre of it?'" he said.

Related:
Madelaine Petsch on Cheryl's Relationship With Toni on Riverdale: "It's a Really Beautiful Thing"

Wild things happen in Riverdale all the time, so nothing is out of the realm of possibility when it comes to guessing what causes the intense scene. Maybe Jughead kills someone. Maybe someone else commits a major crime and Jughead agrees to take the fall for it and runs away to make himself look guilty. Maybe Jughead learns how to fly and gets the heck out of Riverdale because the whole town is — and I cannot stress this enough — psycho, and his friends are mad at him for leaving them behind. I mean, that doesn't explain the blood and their lack of clothing, but I'm just throwing some ideas out there!

Of course, we won't know what happens until next season, so we'll be a little uneasy until then. And that's exactly what Aguirre-Sacasa was hoping to accomplish.

"We wanted to build to something in season four, an unspeakable crime," he told The Hollywood Reporter. "So rather than have something bad happen in the finale, we wanted to flash forward to it, so that part of the fun of season four will be seeing, how did we get to that place? How did those three characters, Archie, Betty, Veronica, get to be in the woods, around that fire, covered in blood, burning Jughead's beanie?"

Well, congrats, because we asked both of those questions and are anxiously awaiting answers.

TV
Fans Asked and Netflix Delivered! Here's What We Know About the Love Is Blind Reunion
by Amanda Prahl 50 minutes ago