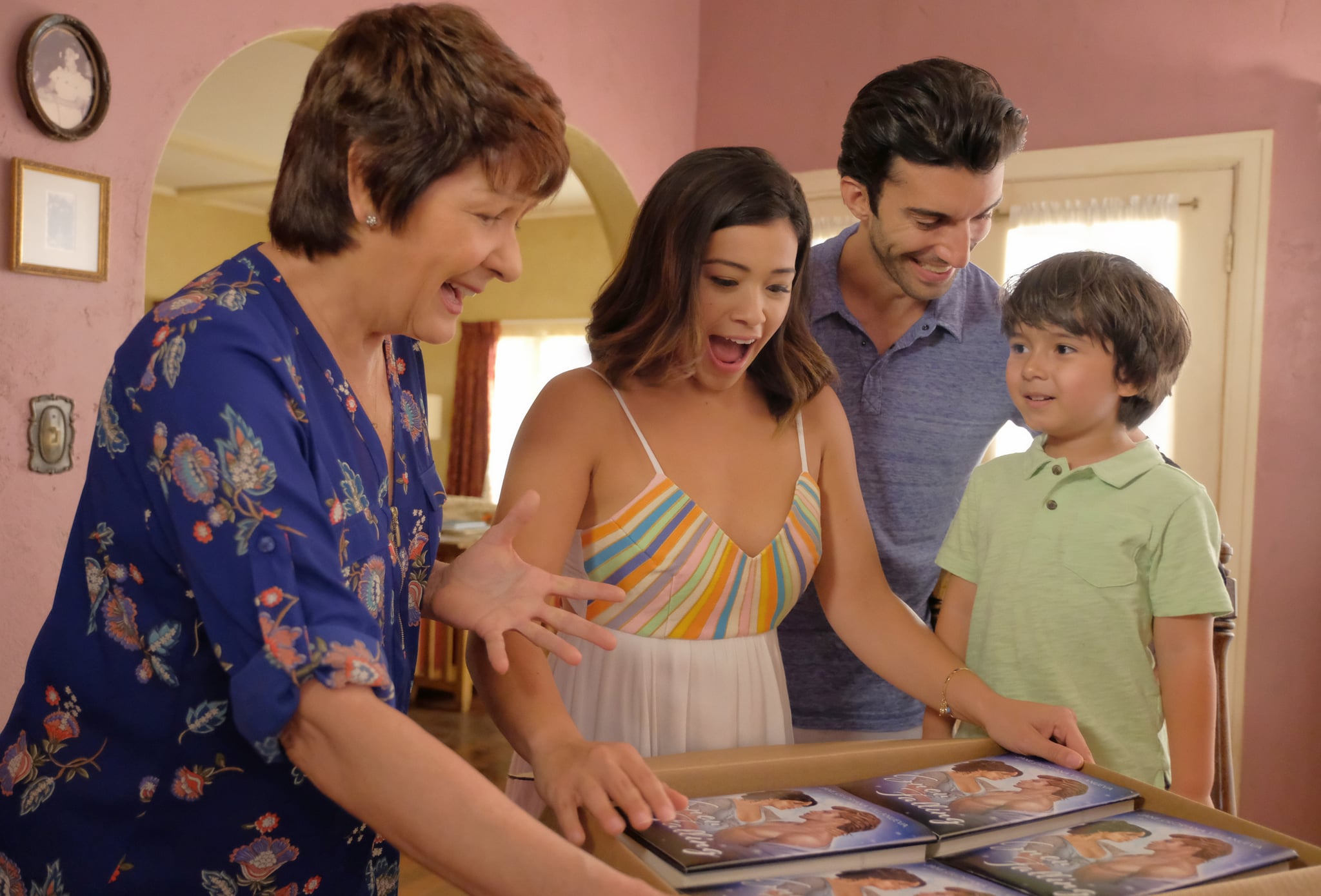 The final season of The CW's Jane the Virgin is at an end, which means it's time to direct our attention to the show's spinoff, Jane the Novela. Fans are obviously very excited about any new information about the project, so we went ahead and got some for you. Jane the Virgin creator Jennie Snyder Urman shared some juicy details about the upcoming series, which is being written by Valentina Garza, while speaking to journalists during the Television Critics Association press tour in January, and since then a bunch more tidbits have come out. Let's break it all down!

No offence to Anthony Mendez, who voices the Latin Lover Narrator on Jane the Virgin, but our girl's got this. It also makes a lot of sense for her to do it, since Snyder Urman said "the spinoff is a different conceit, because they're Jane's novels that she'll write in the future."

If Snyder Urman has her way, Rodriguez will also direct. She's already directed two episodes of Jane the Virgin so far, including the season five premiere, which features her character giving one mammoth monologue and is therefore even more of a directing challenge. On top of that, she's tackled an episode of the other series Snyder Urman executive produces, Charmed. After the panel, Snyder Urman said of Rodriguez's directing that "I knew she was going to be amazing with the actors — that was no surprise to me — but I did not know what a genius she was with composition and cameras and framing. I mean, next level."

It's Closer to the American Horror Story Definition of an 'Anthology'

As opposed to a different story each episode like in Black Mirror, Snyder Urman said that this show will tell one complete story a season, similar to the way it's done on FX's American Horror Story or HBO's True Detective.

This makes sense, she reminded us, because traditional telenovelas tell a story over one season and then move on. "It feels really exciting to be able to tell this kind of emotional, dramatic, scary, funny story all in one season," she said.

Perhaps this might also change the show's chances with the Emmy Awards? Jane the Virgin has always been unfortunately neglected by the TV Academy (although Rodriguez won a Golden Globe in 2015 for best actress in a TV comedy). Emmy voters have one more year to get it right.

Will Any Other Jane the Virgin Characters Appear in This Show?

According to Snyder Urman, "Probably not the first year." She noted that if the show makes it to a second season — provided it gets picked up to series in the first place — and they get time to establish new characters and settings, "we can see what comes. But, I mean, I love this cast. I'd be lucky to work with every single one of them again, and I really hope to." We now have renewed faith that she will, given a recent Instagram post from star Jacqueline Grace Lopez that shows her standing with Ivonne Coll, who plays Alba on JTV. "Goddess," Lopez captioned a cute shot of them hugging. "A privilege to work with this angel and call her Mom." So, it seems Coll will once again be playing a matriarch of some sort!

Overall, having JTV stars or characters pop up in the spinoff honestly isn't that far-fetched of an idea given what we know about Jane's writing. Her first book, Snow Falling (which you can actually buy IRL), is inspired by her own life. Set in early 1900s Miami, it's a love triangle among a hotel employee, the railroad tycoon who owns the hotel, and the police officer to whom she's betrothed. Sure, it only has three and a half stars on Goodreads, but maybe her second book will fare better! Why else would it have scored a $500,000 price tag, right?

The Cast For Season One Is Already Coming Together

Though we probably won't be seeing Jane, Xiomara, or Alba in the first season, we will be seeing some other familiar faces! East Los High's Jacqueline Grace Lopez and Weeds alum Hunter Parrish have been cast as two of the show's leads, Estela and Felix. Similar to how Jane was torn between Michael and Rafael in JTV, Estela will be torn between her boyfriend, Luen (Spider-Man: Far From Home's Remy Hii), and Felix (Parrish), a handsome rich guy.

Former Desperate Housewives star Marcia Cross will also star as Felix's "glamorous mother," Renata, who co-owns a winery with her son and will stop at nothing to secure her son's legacy, even if it means standing in the way of his happiness." Just like a telenovela! As far as the rest of the cast is concerned, you can expect to see Holland Roden (Teen Wolf), Benito Martinez (Sons of Anarchy), Federico Dordei (2 Broke Girls), and more.

The Setting Will Be Different

While Jane the Virgin is set in the colourful, vibrant world of a Miami luxury hotel known as The Marbella, Snyder Urman confirmed that Jane the Novela "will be set in Napa Valley at the intersection of wine and art." That's a twist, since we don't know if Jane knows much about Northern California. She doesn't take a research trip this season, but maybe we can assume she later goes there on her honeymoon with Raf? Or helps Petra scout a new location for the expanding Marbella brand? If she needs any advice, we highly recommend she peruse POPSUGAR'S list of the best things to do in Napa and also maybe our tips for riding the area's famous wine train.

The Tone Will Be the Same

Snyder Urman did stress that the two projects have the same bones and the new one would also have "magical realism and a very actively imaginative heroine." (Hmm. That sounds familiar). Jane the Virgin trademarks like the pun-themed hashtags that appear on screen would also carry on to the new show. We also have been told that the spinoff focuses on a family that fails to keep its secrets buried for long. Think of all the dead bodies buried at or near The Marbella (Rafael's dad! Scott!) or found there (Anezka!).

Maybe they will inspire one of Jane's stories? Snyder Urman did say that there are "little hints here and there" to these stories in this season of Jane the Virgin, "but you've gotta really dig in." Good thing the fifth season is coming to Netflix soon so we can re-watch and try to spot some clues!

Image Source: The CW
Join the conversation
TV2019 Winter TCAJane The Virgin
More from POPSUGAR
From Our Partners
Related Posts