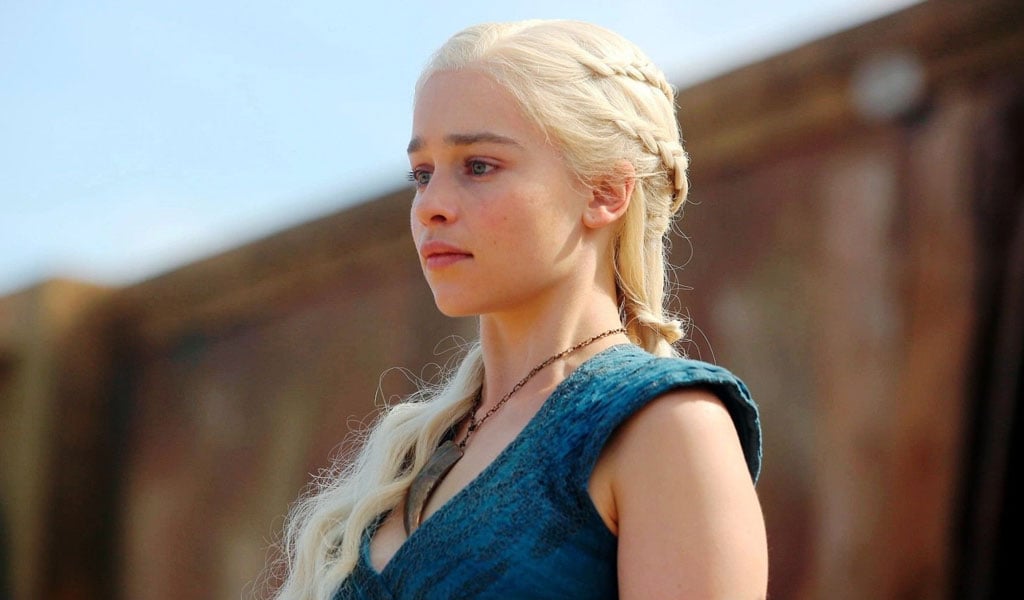 Minor spoilers for Game of Thrones below!

If the second episode of Game of Thrones season seven is any indication, Daenerys Targaryen has a difficult road ahead of her. In "Stormborn," the Mother of Dragons loses half of the Iron Fleet and Dorne's support, as well as three of her trusted political advisers: Ellaria Sand and brother-sister duo Theon and Yara Greyjoy. Their uncle Euron Greyjoy's brutal attack at sea put a major dent in the success Dany has seen so far, but is it enough to derail her reign entirely? A definitive answer to that question will remain a mystery until the show ends after season eight, but we can look to another member from Dany's family tree whose rise to power greatly parallels her own: Aegon Targaryen.

Before Aegon conquered Westeros, it was divided into seven separate sections with seven individual kings: the North, the Riverlands, the Vale, the Westlands, the Stormlands, the Reach, and Dorne. Aegon unified all of the kingdoms but Dorne (which was later conquered by one of his descendants) and ruled over all of them as King. In fact, he's responsible for building the Iron Throne, which he made by using dragonfire to melt the swords of his defeated enemies. As you can see, despite Euron's crushing blow to Dany's forces in "Stormborn," Aegon's track record is more than enough proof that she can still come back from this. Here's what you need to know about how he ended up ruling over Westeros.

His Notable Wins and Losses

Three-hundred years before Dany, Aegon, and his wives Visenya and Rhaenys (who also happened to be his sisters), as well as his three dragons — Balerion, Vhagar, and Meraxes — set out to conquer Westeros, and like his ancient ancestor Daenerys, he also suffered a crippling defeat at sea. When Aegon sent a large fleet of ships to the Vale, the Arryns were able to send some ships of their own to take down Aegon's forces off the coast of Gulltown. Sure, Aegon had dragons on his side, but water prevailed over fire in the first half of the sea-based scuffle, and he lost a massive amount of his fleet. Fortunately, Visenya took matters into her own hands and flew over the remaining Arryn ships with her dragon Vhagar, burning them to ash and taking back some control for her brother-husband.

Another memorable near-loss came in the Stormlands. The battle, known as The Last Storm, went down during a massive storm (surprise, surprise), which left Rhaenys's dragon, Meraxes, unable to fly. Luckily, the harsh weather didn't keep Meraxes from lighting up a ton of the opposing forces from the ground, which eventually helped Aegon take the region.

After the destruction in the Stormlands, Aegon regained his footing in the Field of Fire battle, which saw his armies going up against the Lannisters and Gardeners (who later became the Tyrells) in the wheat fields near Blackwater. Since the only time Aegon and his dragons ever encountered trouble was in wet climates, the dry location of this battle tipped the odds in his favour. The Lannister-Gardener forces were set ablaze almost immediately, killing off scores of them and leaving others with near-fatal burns. A similar battle is teased in the season seven trailer, which shows one of Dany's dragons charging across a burning field with the Dothraki toward what appears to be the Lannisters.

The battle that really showed off Aegon's power, however, was his victory over Harrenhal. Lord Harren Hoare, who ruled over those lands, refused to surrender to Aegon despite his intimidating fleet of dragons and the threat of his entire family line being roasted alive. Since Aegon's mercy was rebuffed, the Targaryen acted on his threat, killing all of the Hoare family and incinerating the castle at Harrenhal. The important thing to note is the fact Aegon offered mercy at all, which proved how adept he was at navigating the ups and downs of Westeros's tangled political web.

Why He Still Matters

Aegon and Dany's ruling styles are not identical, but they're similar enough that it stands to reason the Dragon Queen could take a few notes out of Aegon's playbook and clinch the Iron Throne. Despite the loss of two massive allies in Euron's attack, Daenerys still has her three dragons, the Unsullied, the Dothraki, and the support of the Tyrells. If her army is able to take Casterly Rock from the Lannisters, she will likely win the support of many of the Lannister forces there who don't like or want to fight for Cersei.

With Tyrion by Dany's side, there's enough political savvy between the two of them to succeed. Offering mercy is a trait Daenerys didn't exactly display during her interactions with the slave owners in Meereen, but it's one she'll have to take on if she hopes to win over the nobles of Westeros with words, rather than taking it all by brute force, à la Cersei. Aegon paved the way for Dany, as long as she doesn't let her temper get the best of her.

TV
The Real Housewives of Salt Lake City Is Peak Bravo, and You Should Absolutely Watch
by Hedy Phillips 7 hours ago

TV
Virgin River: 3 Theories About That Cliffhanger Ending in the Second Season
by Kelsie Gibson 7 hours ago

Music
Kelly Clarkson's Cover of Justin Bieber's "Sorry" Begs the Question: What Can't She Sing?
by Monica Sisavat 7 hours ago

Music
Pink and Her Daughter, Willow, Help Make the Season Bright With Their "The Christmas Song" Cover
by Karenna Meredith 7 hours ago

TV
FYI: The Novelist Behind The Undoing Had Her Eye on Sylvia Steineitz, Too
by Kristin Harris 8 hours ago