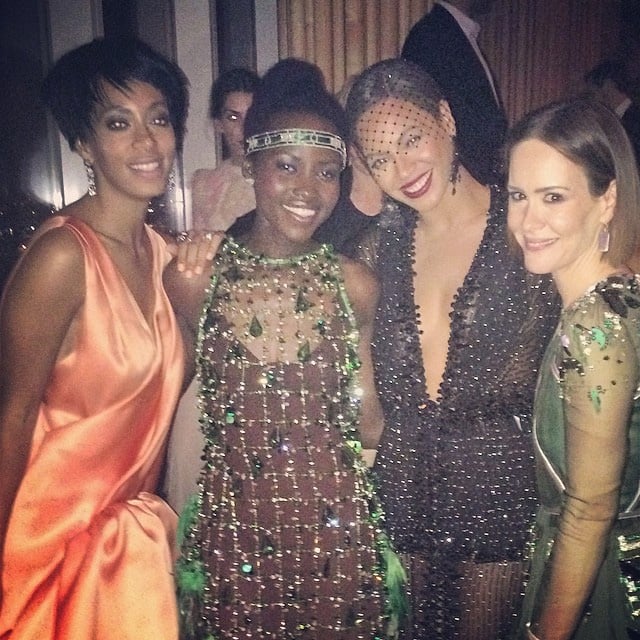 On Monday, a video showing Solange Knowles beating up her brother-in-law, Jay Z, in an elevator quickly went viral. Solange and Jay were joined in the elevator by Beyoncé and the couple's bodyguard, who had to physically restrain Solange at multiple points during their elevator ride. Since the video had no sound (it was taken from a security camera) there is little insight into what was said and why Beyoncé's sister would react so violently. Of course, that hasn't stopped just about every person on the Internet from speculating about what went down. We've gathered up a few of the theories — from the most interesting to the silliest — to join in on the mass speculation. Keep reading for the theories, and share your own thoughts in the comments below!

Solange Is Just Prone to Outbursts

According to Us Weekly, Jay Z's and Beyoncé's calm demeanours during Solange's outburst were because they are used to her violent reactions. "Solange has flipped her lid like that before," a source said. "She is genuinely a sweet and nice person, but she also keeps sh*t real. She can take a small thing, and it triggers her." The source added, "That's why Bey and Jay were so calm. They are used to this from Solange. It has definitely happened before." There's still no word on what set Solange off, but it sounds like the insider was setting it up as an overreaction on Solange's part.

If Solange's temporary temper tantrum is to blame, it might explain why the day after the Met Gala, she was all smiles when she attended a party for artist Kara Walker in Brooklyn.

Solange Was Mad that Jay Hasn't Boosted Her Career

While Solange isn't a household name like her sister, she has made a name for herself as an indie artist. However, according to one report, Solange wanted to break into the mainstream and had asked Jay to help her jumpstart her career. Apparently, she flipped at the Met Gala when she asked Jay to help her write songs and he told her that he didn't have enough time.

Although Jay is married to Beyoncé, there are reports that the two have a somewhat testy relationship. Back in 2008, Solange snapped at a reporter who asked her about Jay's 40/40 club in NYC. She said, "Please don't tie me in to family and my brother-in-law's establishment." The two also rarely pose for photos together, despite attending many of the same events, including Coachella back in April. Solange and Jay didn't pose for snaps while inside the Met Gala, with Beyoncé reportedly staying close to Solange during the event and Jay choosing to hang out with his friend Kanye West and Vogue's Anna Wintour.

Jay Said Something Inappropriate to the Sisters

According to one report, Jay allegedly said something "inappropriate" to both Beyoncé and Solange, which set Solange off. The source said, "When they got in the elevator, it escalated quickly the way family tensions can. It got exceptionally heated the way family moments can." They added that Solange is protective of Beyoncé. This might explain why Bey didn't appear to initially defend Jay during the altercation.

Solange Caused a Scene at the Party, Prompting Beyoncé and Jay to Make Her Leave

While at the Met Gala's after-party in The Standard Hotel, Solange reportedly yelled at her one-time friend Rachel Roy and a group of people. According to another source, Rachel "provoked" Solange in some way. Beyoncé, Jay, and Solange — who had all been hanging out separately up until this point — then "abruptly left" the bash, heading for that now infamous elevator.

Solange's fight with Rachel may have been about Kim Kardashian, who is close friends with Rachel. Back in 2012, Solange reportedly got into a fight with her sister about hanging out with Kim, whom Solange doesn't like. Interestingly enough, Kim documented her Met Gala experience on Instagram and, despite the fact they were all hanging out with the same people, never got a snap with either Beyoncé or Solange. (She did get one of Jay, though.) If Solange was publicly dissing Kim, who is engaged to Jay's close friend Kanye West, it would make sense that Jay and Bey would quickly try to whisk her out of the party. It might also explain why Solange took her anger out on Jay, who has the closest connection to Kim through Kanye. However, if Rachel was provoking Solange, maybe Jay and Bey just wanted to avoid a scene since Solange was clearly on edge.

Solange's after-party antics weren't all violent, as she posed for silly photos with her sister before leaving and also stopped for a snap with 12 Years a Slave stars Sarah Paulson and Lupita Nyong'o.

The New York Daily News reports that the fight started when a few of Solange's "not-famous" friends tried to use Jay's name to get into the Met Gala after-party at the Standard, despite not being dressed appropriately. Apparently, the group were causing a scene at the door, which prompted the hotel's security to contact the couple's bodyguard. Jay was upset that Solange's friends were dropping his name, at which point the "drunk and irritated" Solange said she wanted to leave. As the group headed out, Jay said he was heading to Rihanna's private after-party without Beyoncé, which set Solange off on a tirade against Jay for going out on his own without his wife. Jay snapped back, "You're one to talk," which sparked Solange's violent rage.

What Beyoncé Has to Say

The day after the Met Gala, Beyoncé posted a prayer on Instagram about separating herself from negative influences. There's no insight into who Beyoncé was referencing. In turn, Solange reportedly deleted photos of Beyoncé off her Instagram.

And Then There's Twitter's Thoughts . . .

Digs on Solange Not Being as Famous as Beyoncé

She said, "This elevator is going nowhere" and he said, "Just like your career." AND THE FIGHT WAS ON! #WhatJayZSaidToSolange

Are you the nanny? #WhatJayZSaidToSolange

I bet Solange asked to be in the On the Run your and Jay said no.

"oh hey an elevator! We might hear some of your music on here" #WhatJayZSaidToSolange

I think Jay-Z farted in an elevator and blamed it on Solange. #WhatJayZSaidToSolange