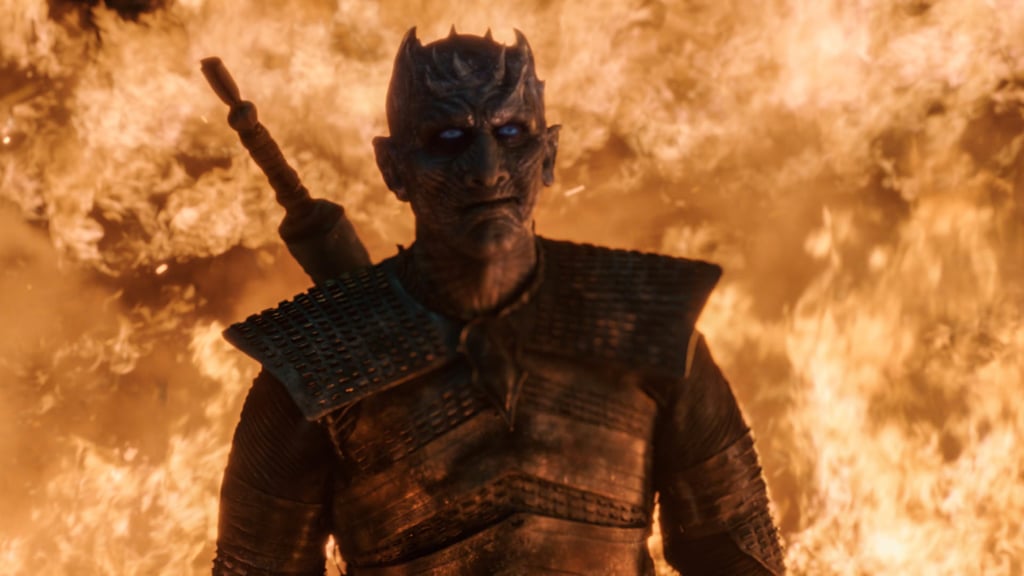 Game of Thrones: Why Daenerys Couldn't Kill the Night King With Dragon Fire

If you're a Game of Thrones fan, you're either elated with the latest episode, or still trying to figure out, what in the name of the old gods and new just happened in Winterfell. Some of you are even feeling both those things at the same time! It's understandable since "The Long Night" was one of the longest episodes of Game of Thrones to date, and it had a lot going on with a lot of different players. But the star of the evening was the man of the hour himself, the Night King.

While he doesn't take the scenic route as some theorized he would, the Night King definitely gives the warriors of Winterfell a hard time. He does some hoodoo magic to create a blizzard-like windstorm that destroys Jon and Daenerys's ability to aid in the battle on the ground. While they're caught in the fog of his making, he engages the two in a (once again, dimly lit) sky battle that has all three dragons roaring in pain. When Daenerys is able to knock him off his perch on Viserion and onto the battlefield below, she takes the opening to try and burn him with dragon fire, commanding Drogon to burn him alive. To her shock and horror, the Night King emerges from the flames completely unscathed and bold enough to send the self-proclaimed queen a smirk. Yes, he actually smirks, and it's low-key terrifying.

Eventually, the Night King meets his end thanks to the tricky fingers of Arya Stark, but that momentary setback visibly startles Daenerys. She has been fairly confident throughout this endeavour that her dragons are the only real way to defeat the Night King, mostly because no one has any clue how to really kill him. But viewers have been witness to the Night King's immunity to fire before, at least four other times in fact. The most recent case was during the capture of the wight beyond the wall, when Drogon and his brothers are blasting fire at the wights attempting to kill Jon and company. The Night King marches through the dragon fire in order to get to a spot he deems worthy enough to throw the javelin and take down Viserion.

So, it shouldn't be a shock to anyone that he was able to withstand the direct blaze from Drogon's fire. And his immunity to fire doesn't have anything to do with a possible Targaryen lineage but rather everything to do with his magic. The only way to defeat him is with Valyrian steel, and that's just what Arya does.

Still, it's pretty entertaining (and disturbing) to watch the Night King's smirk as Daenerys realises the dragon fire did nothing. From a guy who's generally cold and expressionless, it's the first time he seemingly emotes, and it's kind of a badass moment for him. Game of Thrones viewers had a time with this interaction and couldn't help but make fun of the Dragon Queen for her obvious surprise. Check out the funniest reactions to the Night King surviving Drogon's flame, then learn more about how Arya was fated to be the Big Damn Hero of Winterfell.

Related:
Game of Thrones: 5 Huge Moments That Still Have Us Reeling From the Battle of Winterfell
Previous Next Start Slideshow
Join the conversation
TVGame Of Thrones
More from POPSUGAR
From Our Partners
Related Posts