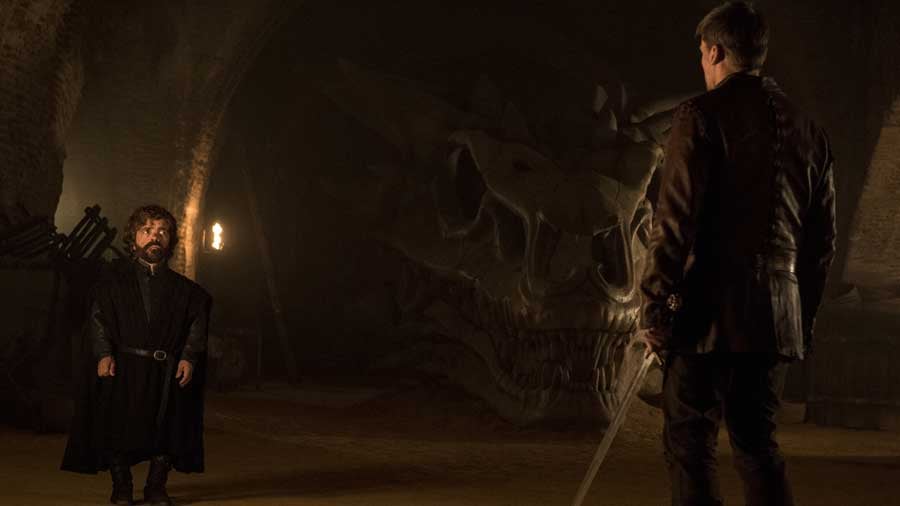 There's a tense meeting on the latest Game of Thrones when Tyrion enlists his friend Bronn to trick his brother Jaime into meeting with Tyrion below the Red Keep.

"I once told Bronn if I ever saw you again I'd cut you in half," Jaime spits at his brother. He can barely contain his animosity toward the younger Lannister — and this is after he found out Tyrion hadn't killed Joffrey, so why the cold shoulder? Because Tyrion killed their father, Tywin Lannister.

Related:
14 Game of Thrones Deaths So Satisfying, You'll Want to Watch Them Again

As Tyrion explains, back in season four, Tywin is out for revenge after Joffrey dies of poisoning at his own wedding. Cersei, Tywin, and pretty much everyone but Jaime thinks Tyrion and Sansa Stark had worked together on the assassination plot, but they hadn't. It was in fact Olenna Tyrell and Littlefinger. But there's no reasoning with Cersei or Tywin, who pass judgment on Tyrion and throw him in a cell to await execution.

But it didn't really have anything to do with Joffrey's death, not for Tywin anyway. That was simply the patriarch's excuse to kill his dwarf son.

"He was going to execute me. He knew I was innocent. He didn't hate me because of anything I did, he hated me because of what I am — a little monster sent to punish him," Tyrion says to Jaime, and Jaime knows Tyrion is right. But Jaime still can't get over the fact that after he helps Tyrion make his escape from King's Landing, Tyrion kills their father with a crossbow anyway.

Related:
What Happened on Game of Thrones This Week? 30 Seriously Insane Things, For Starters

Jaime has always trusted Tyrion, always stood up for him, ever since they were children. He defends his younger brother to Cersei all the time, so he feels immensely betrayed that Tyrion would kill Tywin, even if Tyrion was acting in self-preservation. In fact, Jaime actually blames himself for Tywin's death because he set Tyrion free, something Cersei also blames him for.

You can tell there is still some love there between the brothers, though, because Jaime tells Cersei it wasn't Tyrion who killed their son, it was Olenna. Jaime also urges Cersei to have the meeting with Daenerys that Tyrion requests because he obviously still trusts his brother.

Related:
5 Ways Game of Thrones Has Us Convinced That Tyrion Is a Targaryen

She eventually agrees to the meeting, but not out of any sisterly affection or even pragmatism against the Night's King and his army. No, Cersei is always going to be Tywin's daughter to the core, and she agrees to the meeting in order to try to kill her enemies, i.e. Tyrion and Daenerys.

A popular theory is that Jaime will end up having to kill Cersei this season, and we are willing to bet it will happening defending Tyrion, even if Cersei is now pregnant. The Lannisters are a messy house, indeed.