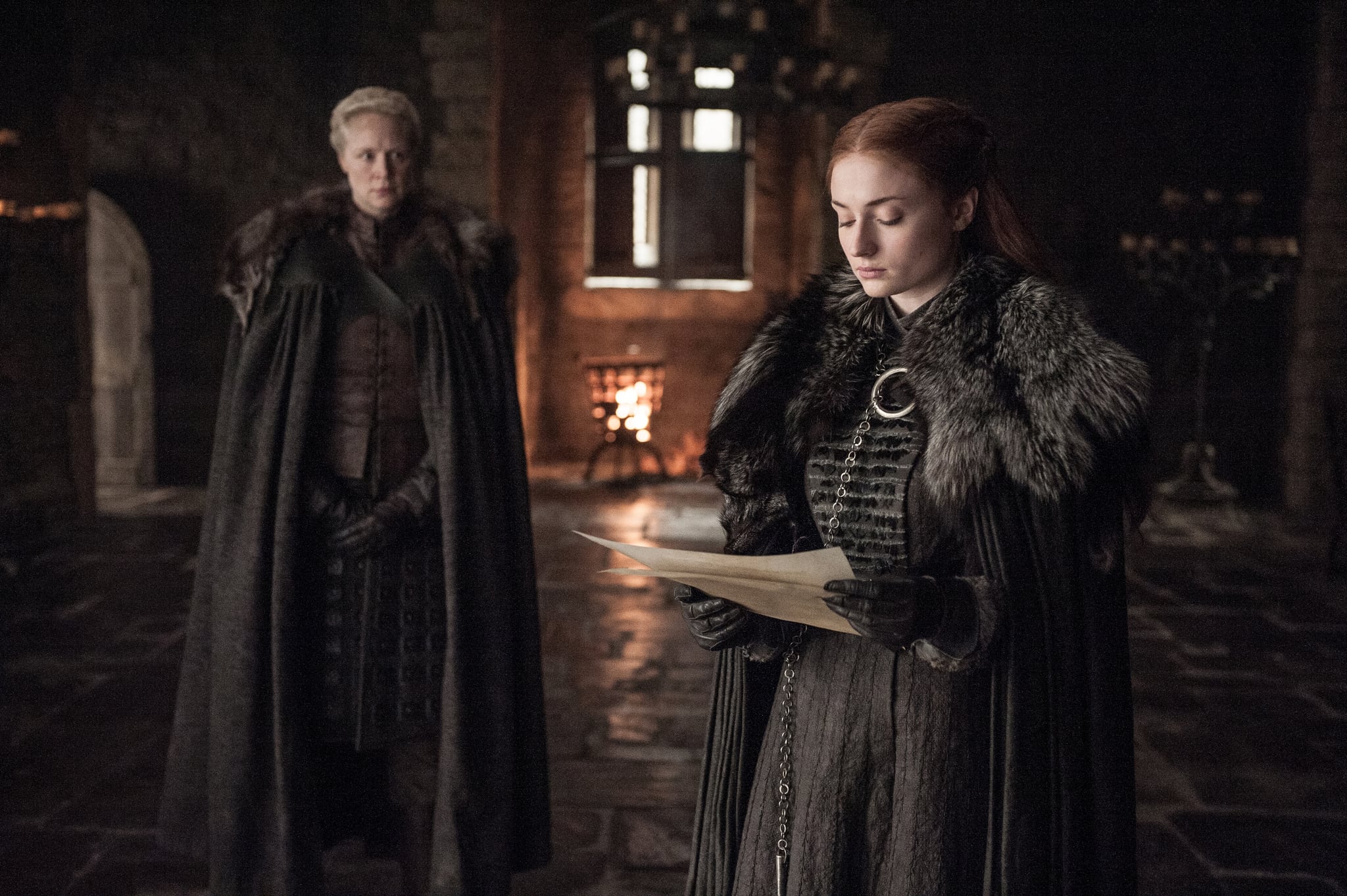 Though there are A LOT of things happening in Game of Thrones' season seven episode "Beyond the Wall" and we are still in our feelings over it, there's one scene that piqued my curiosity. After having a very whispered conversation with Littlefinger about Arya finding the letter she wrote to her late brother Robb about their "treasonous father" from season one, Sansa receives a letter inviting her to King's Landing. It's never explained why she is wanted at this "gathering," especially since Jon will already be there, and leaving Winterfell without any real head of House would be ridiculous. Sansa sends Brienne to represent her interests, and after much discussion, Brienne leaves. I have to wonder, though, how legit is that letter? It comes at an awfully inconvenient time for the Lady of Winterfell, and it's a little suspect when you consider that it's sent from Cersei Lannister. There are a couple of reasons Sansa could have been sent that invitation back to King's Landing, and with Game of Thrones, any of them could be the winner.

As Lady of Winterfell, Sansa is invited to the Wight Viewing Party

This is the most logical of the options and also the least exciting. As Lady of Winterfell, Sansa is the head of a great House and it's expected that she would be invited to events like this. Especially considering that Jon, the King in the North (or not anymore?), is the one calling for the whole shindig. It's a little odd, since having two heads of a House in the same location is risky, especially when it's the South, and Starks never do well in the South, but we're going to assume there are no ill intentions with this explanation.

Knowing that Sansa did NOT kill Joffrey, Cersei wants to apologise

I know, I laughed while typing this up myself. But with Game of Thrones, you never know! Having learned that the late Lady Olenna was actually behind of the death of her son, Cersei has no real reason to hate Sansa anymore. Aside from her general disdain for the younger woman, she only wanted her dead when she thought she had a hand in his death. Now that she knows she was wrong, she could be wanting to make amends and use that to gain an ally in the North.

It's a ruse orchestrated by Littlefinger

At this point, I wouldn't put anything past Petyr the Creeper. He has so many schemes going on in his head, it's hard to believe anything in the North doesn't have his dirty fingers in it somehow. It's totally believable that after convincing Sansa that she could use Brienne as a safety measure against Arya, he would create a reason for her to send her away (and thus inspire more fear from her). He knows there is absolutely no way Sansa would ever return to King's Landing, so she would have to send someone she trusts in her place, aka Brienne. That way, there's no one around who truly has the best interests of both Stark women in mind and who might be able to bring them back to neutral ground. Now he has Sansa paranoid about her sister and Arya seemingly out for her blood. All of his plans could be coming into fruition. Unless they're playing him . . .

Whatever the reason, we now have Sansa without Brienne OR Podrick, the two people dedicated to her safety, while her little sister seems to be gunning for her neck. Hopefully the season finale brings us some answers.