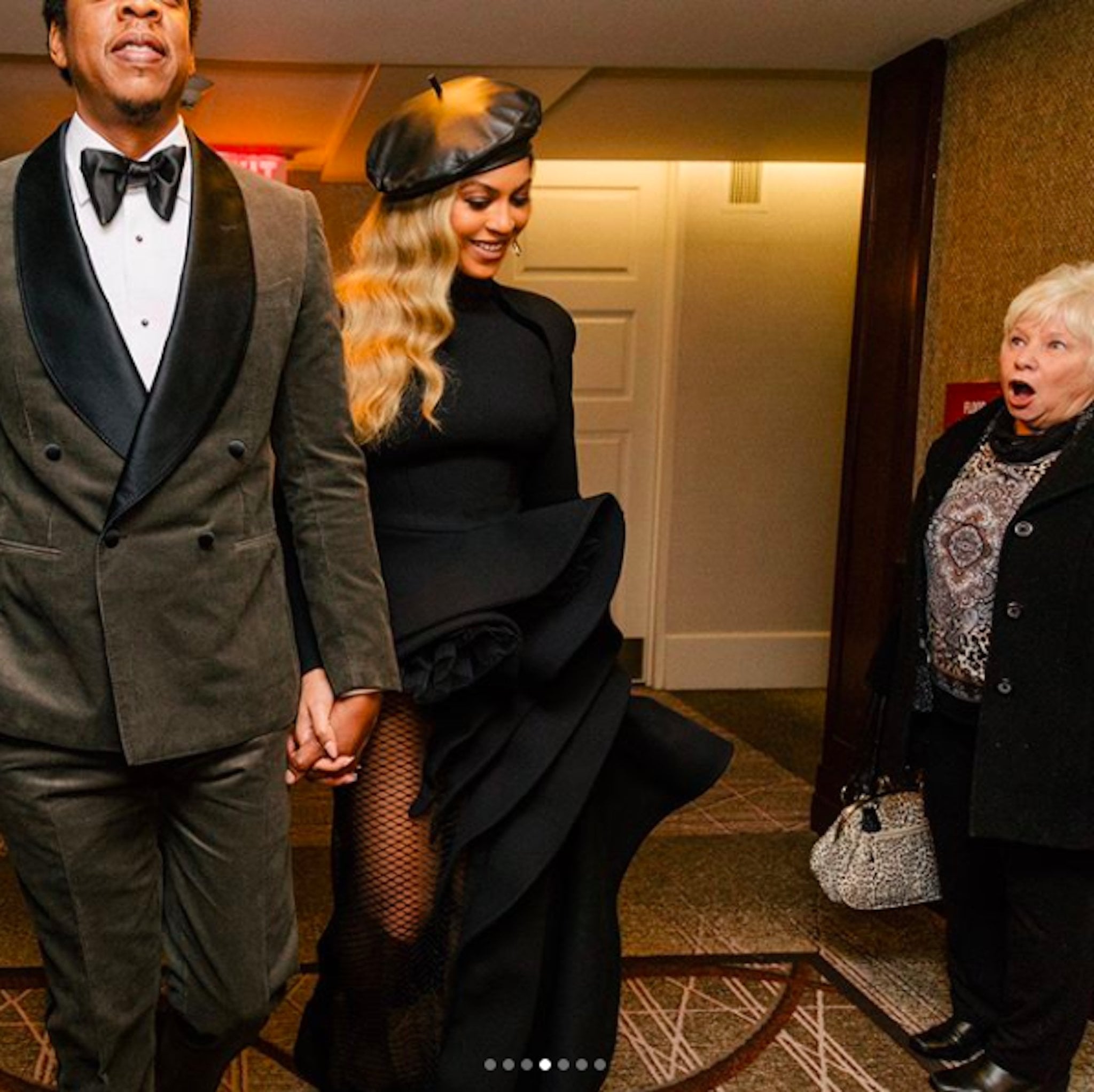 If you've ever wondered what it's like to meet Beyoncé in the flesh, for one woman, that dream came true when she bumped into Queen Bey and JAY-Z at the Sheraton New York Times Square hotel this past weekend. Susan Monaghan recently spoke to The Boston Globe about her chance encounter, and judging by her shocked reaction in the photo, which Beyoncé later uploaded on her Instagram, it was a good one. "I think it's hysterical," she told the newspaper. "Strange things happen to me."

According to Susan, who was visiting for her granddaughter's gymnastics competition and celebrating her daughter's birthday, it was never her intention to run into pop music royalty. She was simply returning from dinner on Saturday when she noticed a "tall" and "really good-looking" man approaching her. He (JAY-Z) asked her if he knew her. "I'm thinking in my mind, 'Who is this?'" she recalled. But it didn't hit her who she was in the presence of until she saw Beyoncé standing to the right of her.

Related:
Beyoncé and JAY-Z Bring Blue Ivy to the Grammys Again, Because Babysitters Are Expensive

"I swear, I felt like I was hugged by an angel," she confessed. Although initially her daughter and granddaughter didn't believe her until they saw her photo going viral the next day, Susan is still over the moon about her meeting with the Carters. "I think [Beyoncé] posted it for me," she said. "So people would believe me." Of course she did. Because that's exactly what an angel would do.

Skin Care
Chika on How PCOS Affected Her Skin and Confidence: "It's Something I Do My Best to Manage"
by Chanel Vargas 19 hours ago

Race and Culture
Beyoncé Calls For an End to SARS and Its "Senseless Brutality" in Nigeria: "I Am Heartbroken"
by Grayson Gilcrease 20 hours ago

Celebrity Style
Billie Eilish Stresses Over the Colour of Her Sneakers, and It Will Make You Crack Up
by Sarah Wasilak 3 days ago

Music
Lady Gaga's New Song Might be a Little Cheesy, but It's Her Most Important One Yet
by Yerin Kim 6 days ago
Latest Celebrity
×