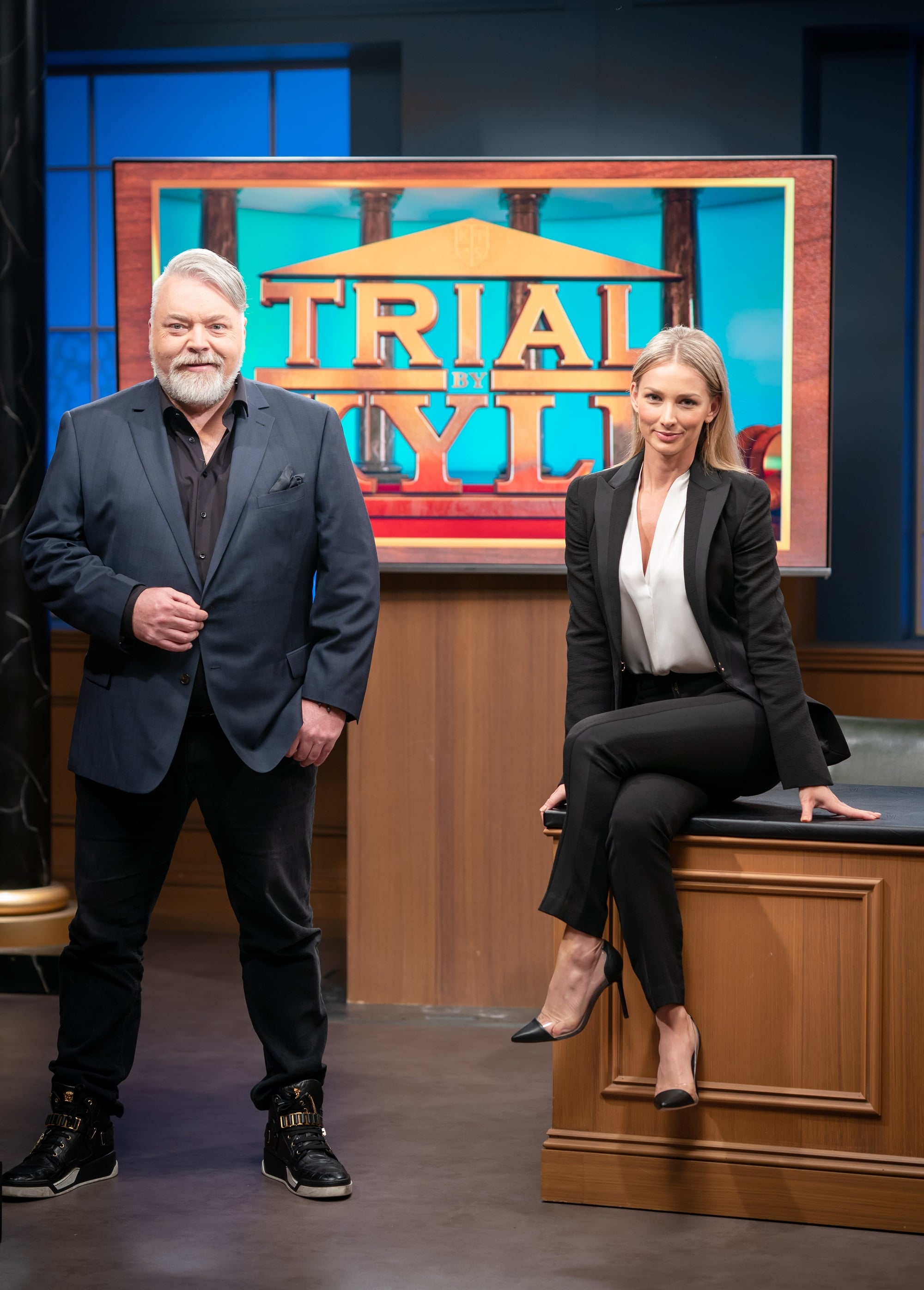 Trial By Kyle rocked Network 10's inaugural Pilot Week and is now set to once again make a splash when its first season premieres on October 24. As much as Kyle's (dis) honourable antics will no doubt keep us on the edge of our seats, we know we are just as excited to see former Bachie winner Anna Heinrich grace our screens again. As a criminal lawyer, Anna will attempt to keep Kyle in line and be the voice of reason amongst the no doubt crazy cases. Below, she chats her working relationship with Kyle, how accurate the show really is and how she balances both a law and media career.

Related:
The Aussie Bachelor Couples Who Have Tied the Knot So Far

POPSUGAR Australia: Hey Anna! What can viewers expect from Trial By Kyle?

Anna: A lot of very interesting and diverse cases. Every case is so different from one another- we've got drag queens fighting over stolen choreography, a husband suing his wife for stealing money and using it on botox, and a mother suing her daughter over a broken bed. . . it's just a real mix of cases that are very entertaining. You're in for a treat!

PS: Kyle is someone who is considered polarising and is known to ruffle a few feathers, how did you find working with him?

Anna: You know what, I can only judge someone on my experience or interactions with them, and I found Kyle very respectful, charming and caring as well. I was pleasantly surprised, I'd been on his radio show a couple of times before that but I hadn't worked with him in this capacity. I guess the best thing about working together is that we've so different. I'm very straighty 180, and I'm the voice of the law while he's the voice of the people. He's so good at being off the cuff, while I'm someone who likes to prepare for everything and have all my notes with me. I couldn't go into it the way he does, but he's very good at it. I was surprised both by how enjoyable it was and how good he is at what he does. I really enjoyed working with him, and the most important thing to me was that he respected me, which I felt he did.

PS: How does Kyle stack up against the judges you've encountered in an actual court?

Anna: The difference with real court is that you can prepare for your case and advise your client the way the judge is likely to go based on the evidence. But Kyle is so unpredictable, you never know what way he's going to go. Even though you may think a defendant or a plaintiff should win, Kyle can completely turn right at the last minute and go for the person you least expect! It's just very unpredictable, there were times when I rolled my eyes and couldn't believe he went a certain way. But that's Kyle, and that's why the show is so enjoyable- you don't know what to expect!

PS: How accurate is the show to an actual court of law?

Anna: I normally do criminal law, and this is civil law. But it's similar in a way that it looked like a real court, but normally if I'm in court then I'm before a real judge or real magistrate. In that way, the stakes are probably higher. [Laughs] But at the same time, a lot of the people who came before Kyle were deadly serious with the dispute they wanted resolved. They came to Kyle as an alternative path over going to real court. In my own career, I've probably dealt with more cases that vary from driving offences to murder matters, so that's the main difference for me personally.

PS: What would your advice to someone wanting to solve a dispute in Kyle's court be?

Anna: Definitely give it a go if you're up to it, but be prepared for anything. If you have a dispute that you wouldn't normally take to court, then come and give Kyle's court a go!

PS: What do you think the biggest misconception about working as a criminal lawyer is?

Anna: People always ask how we defend someone who is guilty. But when it comes to criminal law, no one will ever come to me or any other criminal lawyer and say "I'm guilty, can you defend me?" You can't do that, you can't lie in a court of law. Normally when we've got a client they're going to acknowledge what they've done and plead guilty, and then we get them the best sentence they should get. Or, if they plead not guilty, then we've got to take their word for it and defend them.

PS: Have people often recognised you from your TV appearances when you're in court?

Anna: There's definitely been a couple of times! A couple of years ago I was doing a mention at a court and this woman turned around and was mouthing "I love you" to me. I didn't know if she was looking at me, but then when I turned around she started pointing at me. So I was like, oh this is very awkward and kind of inappropriate for this setting! As much as I like to keep the two separate, I kind of know that isn't always going to be possible. I just try to balance them as best as I can.

PS: How do your balance your law career with the things you do in media?

Anna: I have to thank my boss for allowing me to still work as a lawyer, not many firms would allow you to work part time. There are weeks where I'm not able to come in because I've got other commitments. He acknowledges what I do and is very aware of what I do, he's just a very good boss. He'll allow me to take time off if I need it, and then I'll make up for it another week. I definitely want to keep my foot in the door, I keep up my practising certificate and I enjoy it.

PS: How has being in the media impacted your law career?

Anna: I just don't work as much now! I'm not in the office Monday to Friday anymore and I try not to go to court too often. It's more about taking a backseat, I do a lot of appeal matters because they take time and that means you don't need to do everything in one day, they can go over months. I don't take too much on, I just do what I can and I make it work.

PS: How do you deal with people potentially not taking you seriously in your career, whether it's law or TV?

Anna: I know who I am, I'm enjoying what I'm doing and I'm loving the balance. I think it really comes down to the person who criticise you- they're probably not happy with whatever they're doing. I don't really take that stuff on, especially since over the years I've learnt more about who I am and where I'm heading. It's just like trolls on Instagram, it says more about the person who's writing that comment than it does you. I'm happy with how things are in my life!

TV
Lend Me Your Ears: Lee Daniels and Fred Savage to Reboot The Wonder Years With a Black Family
by Brea Cubit 2 days ago
Latest Celebrity
×