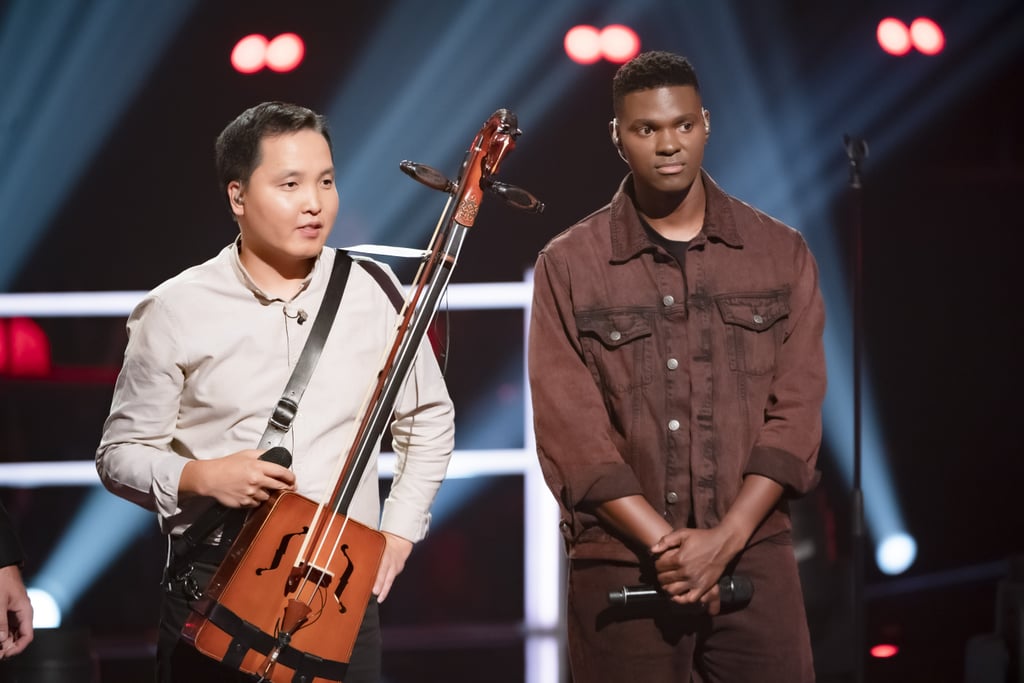 The last performance on The Voice on Sunday was a Battle between Mongolian throat singer Bukhu Ganburged and American pop singer Johnny Manuel.

They were each fighting to keep their places in Team Guy by singing a duet of Michael Jackson's "Earth Song", with their coach choosing the best performer to take through to the Playoffs.

But both the other judges and the public were disappointed that the choice of song so clearly favoured Johnny's style of singing, with Bukhu playing his horse fiddle, or offering back-up vocals, instead of singing for much of the performance.

All the judges stressed how talented the two men were, but Delta Goodrem noted that Bukhu seemed like a "back-up" musician rather than a co-performer. "That's not a Battle. That's not fair."

Kelly Rowland agreed with the accusation that the move was unfair, but Guy defended himself as wanting each contestant to "shine" as they showcased their distinct talents.

Guy complained that Kelly and Delta were "crapping on" the moment, saying that he couldn't expect Bukhu to match Johnny's vocals. "I think you guys are trying to pick fights," he said, as the women insisted that the arrangement of the song was biased against Bukhu.

When asked by host Darren McMullen if he thought the performance was unfair to him, Bukhu said that he didn't know.

The judges talked over one another and made snide comments, including Guy saying he was sorry that this conversation undercut a beautiful performance, and that he was disappointed it had descended into a "circus".

The argument between the judges only ended when Kelly walked out of the room: "I'm not going back and forth with you, Guy, I'm not doing it. I'm not doing that. That ain't even working," she said.

"So a walk-off does heaps," he yelled to her backstage. "What's a walk-off gonna do? It's so disrespectful."

"No, you're disrespectful!" she retorted, as Bukhu, Johnny and Darren McMullen waited on stage.

Taking to Twitter after the episode, Guy admitted that the argument was not a good look: "There is a lot that people don't see on this show including mentoring and follow up phone calls with the artists. I am disappointed that I didn't just cop it on the chin and bring focus back to the artists.

"It was a challenge having someone like Bukhu and i admit that it seemed vocally unbalanced," he acknowledged, before explaining his reasoning. "I wanted them both 2 shine & thought that showcasing Bukhu's musicianship was the way 2 do it. He is exceptional and I'm sad that this went down the way it did due to my choice. It's something that cuts me & I didn't handle it well."

Monday's episode opened right in the middle of the drama, with Guy continuing to describe the situation as a "circus", which Delta said was "disrespectful to Kelly". Talking to producers off stage, Kelly said that they should "move on", because the conversation was "redundant".

Delta was asked by Darren to go backstage to talk to Kelly, and Guy used the time to talk to the contestants about the "great moment" they'd just offered fans. "I'm sorry that it's turned to this."

"I think we should let it go," Kelly told Delta. "My feelin's ain't hurt," she said, as they rejoined Boy George and Guy.

In a move that surprised no one, Guy chose to take Johnny through to the Playoffs: "Bukhu, you have represented your gift so beautifully on all levels and you should be so proud of yourself.

"I think it's quite clear that this show definitely suits somebody like Johnny, and so I don't think it'll be any surprise that I'm going to go for Johnny."

Bukhu took the decision with such grace that he used his last moments on the show to get the crowd and coaches to applaud the underappreciated backing band.

But Guy did not handle the disagreement with that same kindness: "It seems like a low blow for not any other game but drama," Guy said backstage to host Renee Bargh. And all the other coaches could hear him!

"I don't even think people believe some of things they say sometimes," Guy continued to Bukhu and Johnny, with the other judges still able to hear him through their mics.

"For me, it's not an ego thing, it's moreso, how do i feel like this could've been better for this artist?" Kelly explained to a producer, before Guy complained that he feels "bruised" from this "blow-up with a workmate".

But the tension in the room was quickly cut by Boy George lighting sage, and leading a collective meditation.

See what people had to say about Guy's unconventional choice of direction for Bukhu and Johnny's performance: