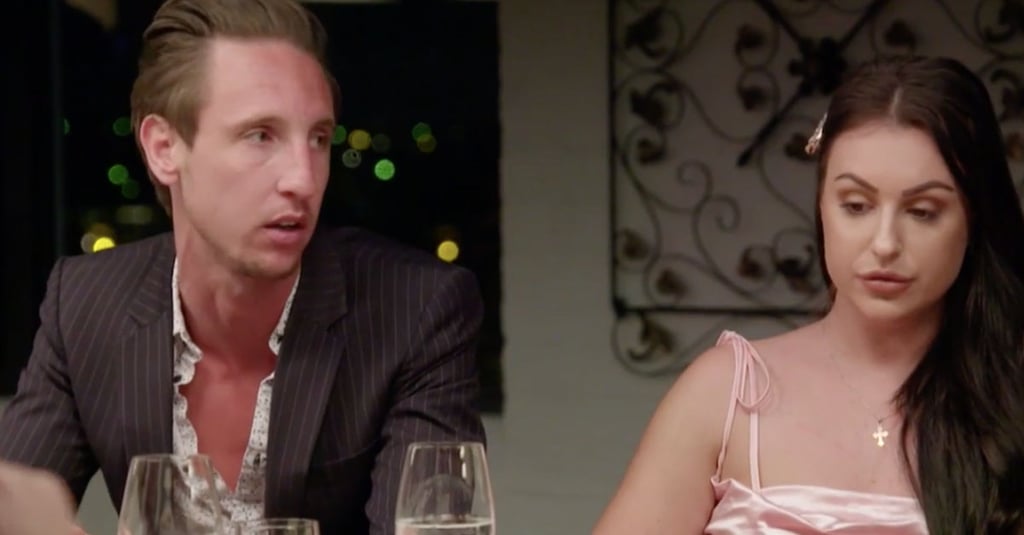 The drama of the episode centred on Aleks and Ivan, and, by extension, Michael and Josh. Michael asked Aleks how she had managed to suddenly switch off her romantic feelings for Ivan, even after they'd had sex. Aleks said that they hadn't had sex, but shared a different version of intimacy. So Josh weighed in, saying that he too had heard from Aleks that they'd gone all the way: "I've heard from both of you guys that youse have." Diplomatically Ivan stressed to the group, "I don't feel cheated, I don't feel dumped, I still care for the woman, and I recognise that she is missing something, and maybe I'm not that person and I will be OK with that."

Aleks left the dinner party in tears, feeling attacked, with Ivan chasing after her, as Michael told the group an extra piece of information: that Aleks had been on a date with another guy the other night. He saw her in the lobby, and she told him that the guy was "super hot" and "totally [her] type". Mishel and Connie seemed to verify this, Mishel telling the cameras about a Ferrari-driving guy who was interested in Aleks that they met at a Serbian night a couple weeks ago, and Connie confirming that, "I knew she was out with men." "Did she cheat on him?" Jon asked. Michael and Stacey said yes.

When Aleks and Ivan returned to the room, she quickly found out what stories were being told about her and went to confront Michael: "So I went on a date, are you fucking serious?" She told everyone that she was out at dinner with a new female friend and that they were joined by the middle-aged restaurant owner. "Sorry guys, if that was disrespectful to the experiment, but I just want you guys to know that wasn't a romantic date with a man." Aleks accused Michael of just making up drama.

As chatter returned to Aleks and Ivan's sex life, Josh and Michael tried to convince Ivan to stick up for himself and for them, as now they were being accused of lying. Ivan refused. Then it came out that Ivan had actually requested that they bring up the sex chat for him. Josh explained that Ivan "rang [them] stressed out" and said, "'We've been rooting like rabbits for weeks. If I bring it up, will you have my back?" Ivan said that was untrue, and the whole kerfuffle led Aleks to officially leave the party, saying she didn't care where Ivan slept that night. She reckoned that he lied to his friends to "protect [his] manlihood". He followed her out and tried to convince her to trust him on the matter.

The questions then are: Did Aleks and Ivan have sex? Did Ivan ask Josh and Michael to bring up the fact that they'd had sex at dinner? And lastly, did Aleks actually cheat on Ivan?

There were plenty of different interpretations of the night's events, even from the participants themselves. Michael seemed to think that Ivan was being a gentleman, sticking up for Aleks as she lied about their sex life, even when it came at his own expense. Lizzie reckoned that Ivan didn't want to look rejected, while Connie posited that tonight's entire scenario was a stitch-up to make Josh and Michael look like the villains, and Ivan look like a hero.

It's a theory Ivan denied to the camera, saying that none of this scenario was staged, he loves his TV wife, and hopes to win her back. "I've learned the ins and outs of her as a woman and as a human being," he said, seemingly implying that they had in fact had sex.

Related:
The Last Couple Left From MAFS 2020 Is Liz and Seb
Previous Next Start Slideshow
Join the conversation
MAFS 2020MAFSMarried At First SightAustralian TVReality TV
More from POPSUGAR
From Our Partners
Related Posts

SAS Australia
SAS Australia Premiered Last Night And the Internet Agrees, It’s the Reality Show We All Deserve
by Bree-Grant 14 hours ago

SAS Australia
Roxy Jacenko Silences Trolls by Revealing the Real Reason She Quit SAS Australia, "My Health is My Number One Priority"
by Bree-Grant 17 hours ago