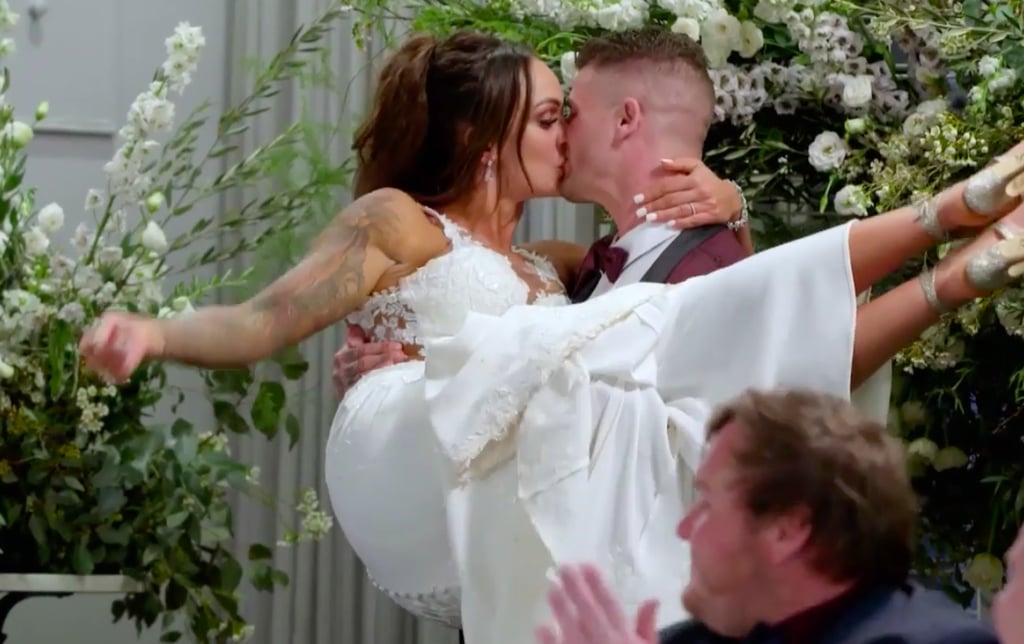 Despite the disapproval of David's parents, Hayley and David seemed to genuinely connect at their wedding on episode three of Married at First Sight. He found her beatboxing, dancing and rapping charming, even as the camera cut to the unimpressed faces of his parents, and one of his groomsmen noted, "It's a lot of personality in one relationship." Still their energy doesn't seem to match — she's loud and outgoing, he's a man who wears a picture of his dog Jasmine on his wedding socks.

Related:
All the Pics From Natasha and Mikey's Glam Wedding on Married at First Sight

They were very physically affectionate immediately, as they got to know each other and their shared interest in tattoos, horses and boxing. And Hayley decided to invest in fancy underwear for her special day. At the end of the night, Hayley presented her new partner with cookies.

Still, there is one thing that Hayley hasn't revealed to David — her past as a drug addict, who was thrown out of home at 17. She asked him for reassurance that he would stand by her when she did tell him her whole truth, which he gave, vowing to tell him when the subject comes up organically. David isn't sharing his tragic backstory yet either: that while boxing he had a severe spinal injury and had to learn to walk again, so now he drives trucks and lives on a farm.

Can't wait to see if these two can maintain their huge energy!

The Voice
Wondering Why You Recognise Some of The Voice Contestants? It's Because They're All Stars
by Hannah Story 2 hours ago

Locky Gilbert
Apparently The Bachelor Has Been Filming Group Dates Over Zoom . . . Which Sounds Like a Great Idea
by Hannah Story 6 hours ago