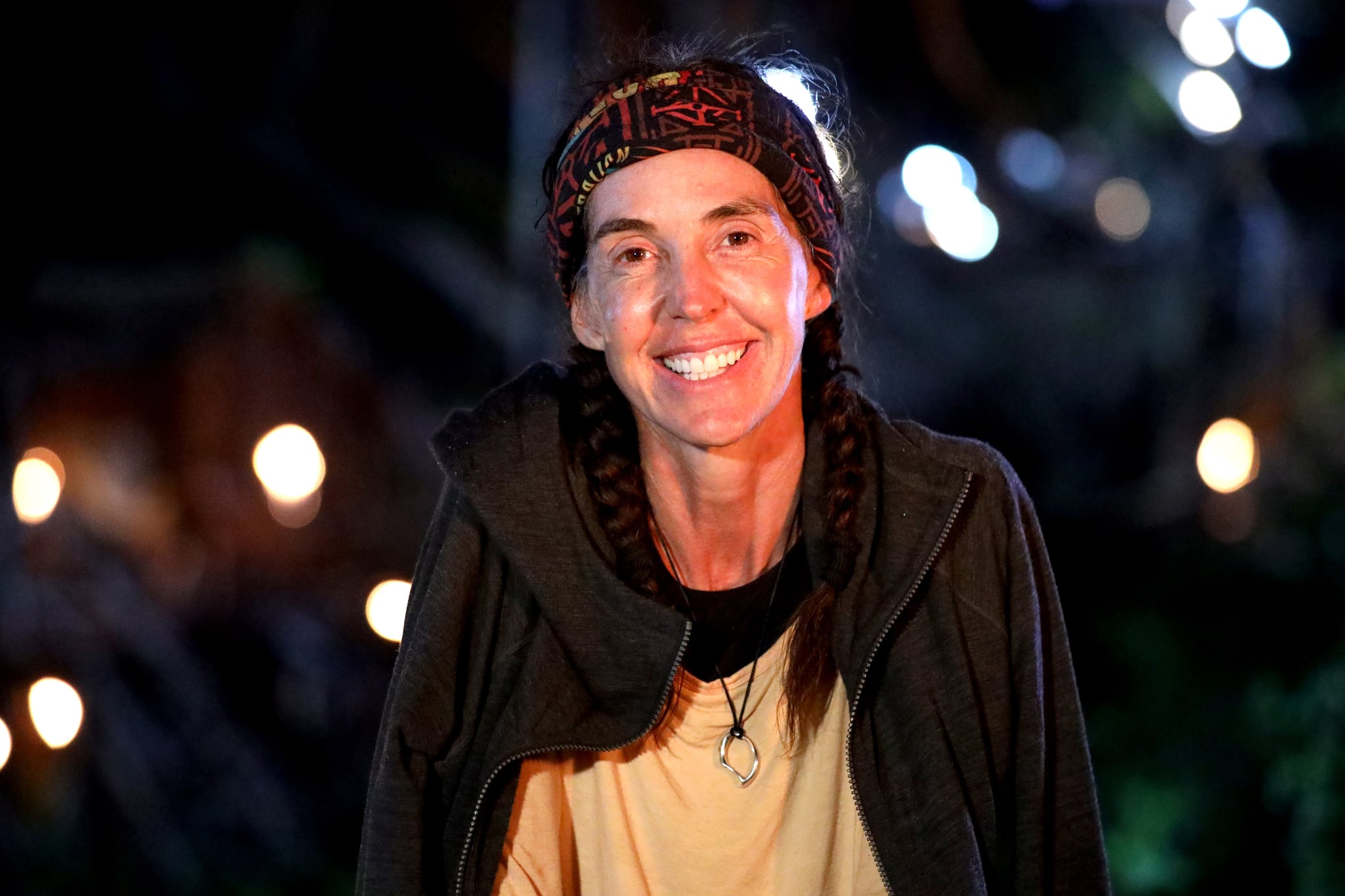 Hugely successful businesswoman Janine Allis was one of the most powerful players on this season of Australian Survivor. Despite being dubbed 'the Godmother' by rival Harry Hills, she managed to evade attention throughout the post-merge game by deflecting the target on to equally threatening players. However, her luck ran out last night when Luke Toki won individual immunity, thwarting plans to eliminate him. Below, she chats how her career experience helped her in the game, what she really thought about former close ally Abbey Holmes defecting from the group, and what she would have done with the prize money had she won.

POPSUGAR Australia: Hey Janine! Sad to see you go. Were you surprised to be voted out?

Janine: Every time you sit on that very hard stool at tribal, you always expect to go. I think the day that you feel comfortable is the day that you go. But look, I felt like I had the numbers, and I felt that it was in the people I was with's best interests to vote with me, but clearly, I was wrong and good on them!

PS: Did you think it was a mistake for the others to vote you out at that time?

Janine: I think for Abbey it was because having a solid three with only six people left would have given us incredible power. Breaking that three up meant that you were vulnerable, and she knew that we had been loyal from the start. That's all you can actually go on, what's happened in the past. But then again, what you didn't see was that Luke told her a 'Survivor lie' that Pia and I wanted him in the final three with us, not her. It was an absolute complete lie but she believed it. People were telling lies everywhere, so she should have come to us and said, "look, Luke's said this, what do you think?" It's a shame for my game, but we will see how it pans out for Abbey, it might have actually been the best decision she made in the game.

PS: Considering how often it's been mentioned that Luke is a massive threat, it seems surprising she would believe that, but I guess that's a testament to Luke's social game. . .

Janine: Yeah, he is a mastermind at this game. Luke has a superpower which is that he's so likeable. I would say the social game is the most powerful part of the game, bigger than being strong or fast. Being good socially is the way to go.

PS: You and Abbey were really close in the game until she turned her back on your alliance by voting out Simon. How did you feel about her defecting?

Janine: You get disappointed, because we had gone on a journey from the start, and we had really backed each other up. We had always told the truth [to each other], and I was really close to her. It was a surprise, but then again, I see this is a game. If that's how she wants to play, then that's her game, and I support her in that. Everyone makes choices based on their own best interests, and if that's what she thought was on the case, then good on her. I don't hold any grudges at all, it's a game, and she played well. . . it got her further than me in the game!

PS: Could you elaborate a bit further on why decided to target Baden last night over a more obvious threat like Harry?

Janine: Really good question! Basically, we came up to Luke and said, "look, we feel like we're disconnected, let's talk about it." So he said, "I feel like you think I'm a big threat," and I said, "well, you are a big threat." Then he said, "I know you think of Harry as a threat, so if we vote out Baden, the next person to potentially get voted out before me would be Harry." He meant if you vote out Harry, then obviously you'd rather go to the final two with Baden over Luke, so that would make him vulnerable [the next vote]. I thought that was actually a really smart suggestion, and I was supportive of that.

PS: What would your pitch to the jury have been had you made it to the end? I think a lot of people wouldn't think of you as in need of the prize money, so what would your argument have been to still get them to award you?

Janine: What I was telling people out there was that no one would give me the money. That was my pitch, "take me to final two and you will win." But what they didn't know was that I'd told the producers that I had no intention of taking the money. I had every intention of giving it to charity, and not only that, I was going to suggest that they could actually tell me which charity to give it to. My pitch would have been, "take the money off the table, and let's look purely at the game." I agree with you, I don't think anyone would have awarded me the half a million dollars, but I would have had enormous pleasure in giving that to some really worthy charities.

PS: How did your experience as such a successful businesswoman help you in the game of Survivor?

Janine: I think it's all about people, and it's about listening more than talking. It's also about making sure people feel like they're involved in every decision, which they were, we were very collaborative. If someone wanted to vote someone out that I disagreed with, then hopefully I had the skills to show them why the person I wanted out was a better option. It was always about respect, I think that's the key thing, whether it's in business, in life or Survivor. The key thing is to respect people and their views, and that was my gameplay. It was like, "I'm not this big ogre-like businesswoman who makes all the decisions," I wanted to really make it a collaborative journey.

PS: What are your thoughts on the Godmother nickname, do you think it's an accurate moniker?

Janine: I thought it was funny! At the end of the day, if you're playing a game, you might as well have a character name. At the start, I knew Harry was trying to deflect the attention off him and put it on me, and as it went on, it just kind of stuck. But I was conscious that last season Mat Rogers got the name godfather and then was blindsided the next day, so it was kind of like, "no, no, don't look at me, I'm not the godmother, I'm just this person playing quietly in the corner!" It was always a worry because as soon as you have a title and a reputation, you become a resume plug for other people

PS: Do you have any regrets from the game?

Janine: No, no way! It would have been great to make it to the final two, but at the end of the day, I'm really proud I got to 44 days. I got an individual immunity necklace, I found an idol, I ticked a lot of Survivor boxes. So I feel like I had a very full game, which I was really happy with. I felt like I was really active in the game as well since the original Champions tribe kept losing all the immunity challenges. We had to play hard from day one, Pia and I went to more tribal councils than anyone else and we had to fight through the whole game. So I must admit, I was really pleased with how it all panned out.

PS: What was the highlight of your experience?

Janine: I think my highlights included winning the immunity necklace, and also the tribal council where Shaun went home. I was really happy with my ability to convince everyone to vote for Shaun, because it had been Luke who was going home, so I was really proud of that. But I think my highlight was really the relationship I formed and continue to have with Pia. The fact I managed to leave the game with a great friendship is really the highlight.

PS: Speaking of Pia, you praised her abilities as a player a lot throughout the game, and last night you said she would "turn this whole game around." What made you so confident in her game at that time?

Janine: It was because we had so many conversations over who would go when they would go, why they would go. But it was not only that, it's all well and good to say who you want to go, but it's the execution that has the real value. Pia had such a strong social game that she'd be up at two in the morning having a laugh with someone by the fire. To have someone you completely trust throughout the whole game really helps enormously with your moral compass, but also with the enjoyment of the game.

PS: What was your experience of going to jury villa and being reunited with some people you'd played a big part in voting out like?

Janine: Because all those guys [on the jury] are such game players, I felt very confident I wouldn't arrive to them going, "you cow, you voted me out," and all that. It was actually really good, we had fantastic chats about the game in jury villa. While I would have liked to have won, option two was to spend time with those guys, who I really respect and like a lot!

PS: What do you want to see from a winner as a juror? What sort of pitch would convince you to vote for someone?

Janine: At the end of the day I have such huge respect for the game that I would take all emotion out of it and definitely look at the game itself. I'd hear what they had to say and look at what sort of game they'd played. But obviously I know Pia's game, so it'd be a hard ask for me to vote for anyone but her. However, I might change my mind after the pitch! It'll be interesting to see how it all unfolds, I'm looking forward to the public seeing the rest of the game because there's lots more twists and turns to come.