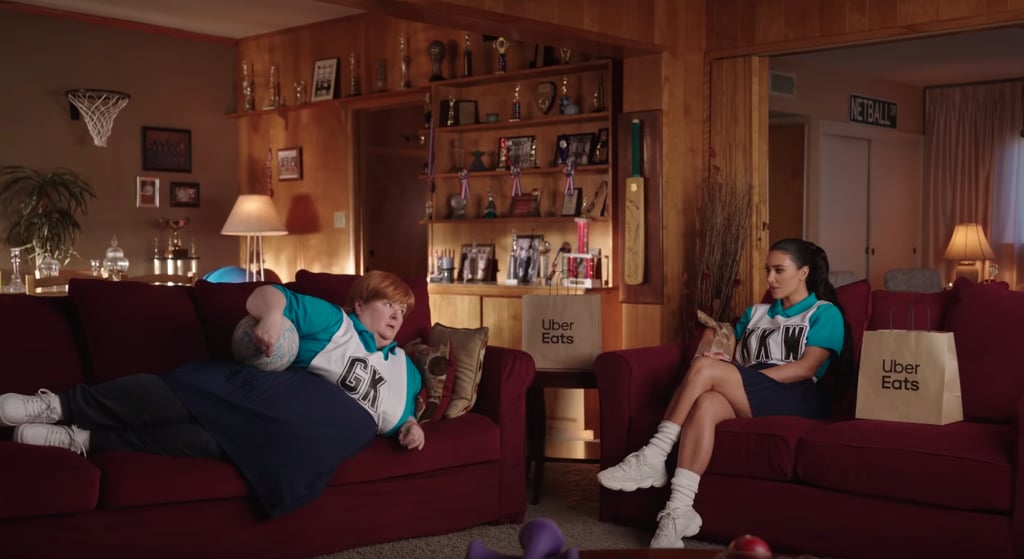 It's safe to say Kath and Kim's Sharon Strzelecki and Kim Craig are one of the most iconic (second) best friend duos in Aussie TV history. However, it appears the OG Kim has got competition, as Kim Kardashian has just teamed up with Sharon in a new Uber Eats ad.

Yep, in an unexpected yet hilarious partnership, Kimmy K and Sharon are just two netball teammates hanging out and smashing some dinner after a game. While we can't say we ever expected to hear Kim say she's eating a "chicken schnitty", her down to earth choice in cuisine is just the tip of the iceberg.

On top of ordering Uber Eats, the ad depicts Sharon schooling Kim on the correct way to say 'noice'. Although we're not sure we can imagine Kim taking on this ah, unique pronunciation, we know we're certainly hoping to see more from this downright iconic pairing in the future.

Check out the noice, different and unusual ad in full below.

Kim Kardashian Cringes Over Her "Worst Look" of All Time: "I Just Wanted My Picture Taken"
Previous Next Start Slideshow
Join the conversation
TVKim Kardashian WestAustralian TV
More from POPSUGAR
From Our Partners
Related Posts

Celebrity Style
Jenna Lyons on Her New TV Show and the One J.Crew Piece She'll Never Get Rid Of
by Sarah Wasilak 14 hours ago