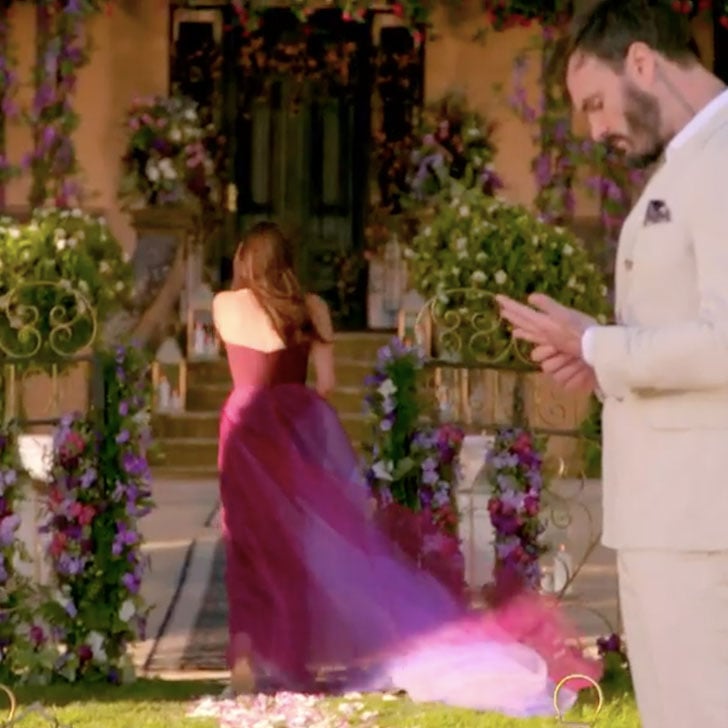 Locky Just Dumped Bella and Her Response Was All-Time: "Can I Leave? I'm Going"

Locky has dumped Bella in The Bachelor finale — but at least she didn't have to get on an international flight. And, in leaving him, she didn't put up with any nonsense!

She stepped up first to meet Locky and hugged him as he started sobbing. They stood with each other, holding hands.

"I feel in love with ya the first day I saw you and I saw those big brown eyes, they just made me go crazy," he began. "When I told you I love you, I meant every single word. But I have fallen in love with two girls and I know you don't see where your future is at the moment. I think I need just a little bit of certainty. I just don't know if I can see us working."

"This is it?" Bella asked in response, taking her hands out from his. "I'm so sorry," he cried, as she looked away, clearly hurt but wanting to stay strong.

"I just don't get it," she continued, calling him out for literally saying the L-word and then dumping her in the Hunter Valley. "Yesterday you told me you were in love with me. Well why not follow through with a relationship then?"

He said he needed something more concrete than just that she was happy just to start a life with him. "You can't turn this around on me," she said, shutting down his pity party as he continued to cry. "Can I leave? I'm going," she said before walking off, Locky crying in her wake.

In the limo, she spoke about how his behaviour was not that of someone who was in love with her.

Related:
Fans Called Out The Bachelor Last Night for Leaning on the Overprotective Brother/Father Cliche

That rejection, after leading her to believe he was interested in her (pure f*ckboi areas) ) was so upsetting to watch — but it was also iconic to see Bella demand an explanation, then not let him play the sympathy card.

Everyone online agreed that Bella's response to her rejection was on-point:

SAS Australia
SAS Australia Premiered Last Night And the Internet Agrees, It’s the Reality Show We All Deserve
by Bree-Grant 20 hours ago

SAS Australia
Roxy Jacenko Silences Trolls by Revealing the Real Reason She Quit SAS Australia, "My Health is My Number One Priority"
by Bree-Grant 23 hours ago