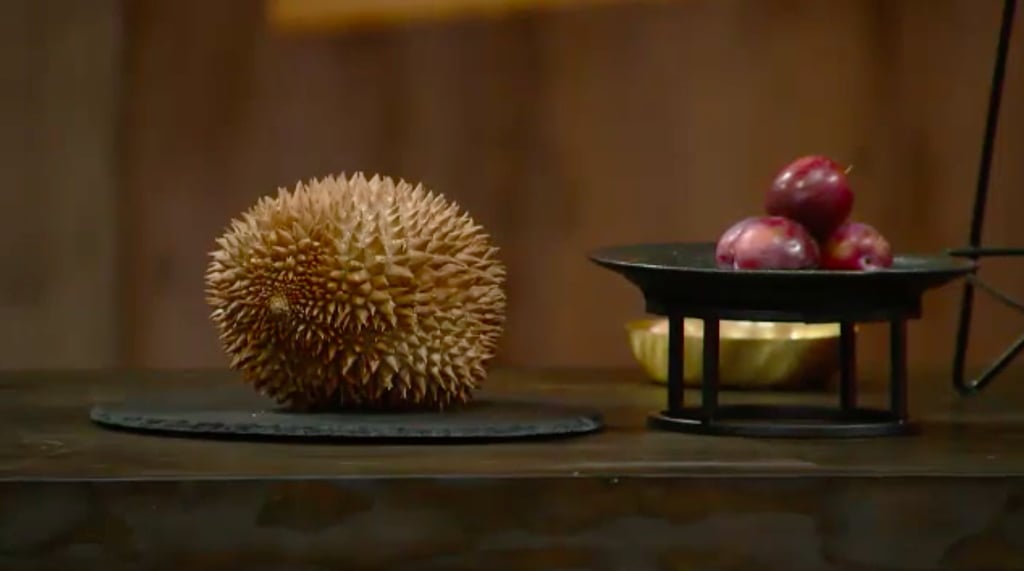 The Durian Was the Unlikely Star of MasterChef: Back to Win Last Night

They were confronted with a deeply strange Mystery Box — it was empty. The judges revealed that they would be choosing the eight items for the box by drawing numbers from a bingo cage. Looking at the line-up of potential candidates, Laura fretted about the possibility of cooking with the "worst" fruit, durian.

As the contestants willed Melissa Leong to draw a protein, what they actually called out were: brown onions, grapes, plums, Kipfler potatoes, champagne, kale, lemons and durian. "Yes!" Poh exclaimed, laughing, when durian's number was read out, as Laura shook her head in disappointment.

Poh explained to camera that the durian is a southeast Asian fruit banned from public transport and hotels "because of its very, very odorous nature": "It smells a little bit like garbage. When you eat it, it's got this really unique flavour and it has a really custardy texture."

While Poh tried to get Andy Allen and Jock Zonfrillo to say if they liked durian, Andy would only answer casually, "You'll have to wait and find out. We might love it!"

But the contestants just had to make their best dish in 60 minutes using any one of the ingredients. That meant no one chose to use the humble — yet thorny — durian.

Poh admitted she felt guilty about not using the durian, but chose to make a lemon meringue sponge cake instead. "I am a bit worried that I'm not pushing myself to use the durian. I kind of feel like it's from my culture . . ." But while she would usually be "a little bit controversial" and introduce the judges to something they may not have tried before, she decided that a world in self-isolation needed a really good cake.

Talking to Andy, who wondered aloud if she might be playing it too safe, Poh continued: "You know, the daredevil side of me was so gravitating towards the durian, but I'm just feeling . . . I know this is a really good cake."

"No durian?" Melissa asked when she came over to Poh later in the cook. "I'm so sorry," Poh said. "I knew you'd be really disappointed with me. But I just don't feel like it's the right time to take a risk right now.

"I just think, without being racist, I just don't know if Jock and Andy would get it," she laughed.

Related:
Emelia Jackson Took Out MasterChef: Back to Win & a Few of Her Fellow Contestants Pegged It From the Beginning

People watching at home were disappointed not to see durian in the spotlight in the final dishes, but half-expected to see Poh change her mind at the last minute.

Locky Gilbert
Locky and Irena Gush About Their Blooming Real-World Relationship: "You're Perfect for Me"
by Hannah Story 17 hours ago

Locky Gilbert
Bella Talks About the Silver Lining to Her Bachelor Heartbreak: “Sometimes Best Mates Are Better Than Boyfriends”
by Hannah Story 19 hours ago