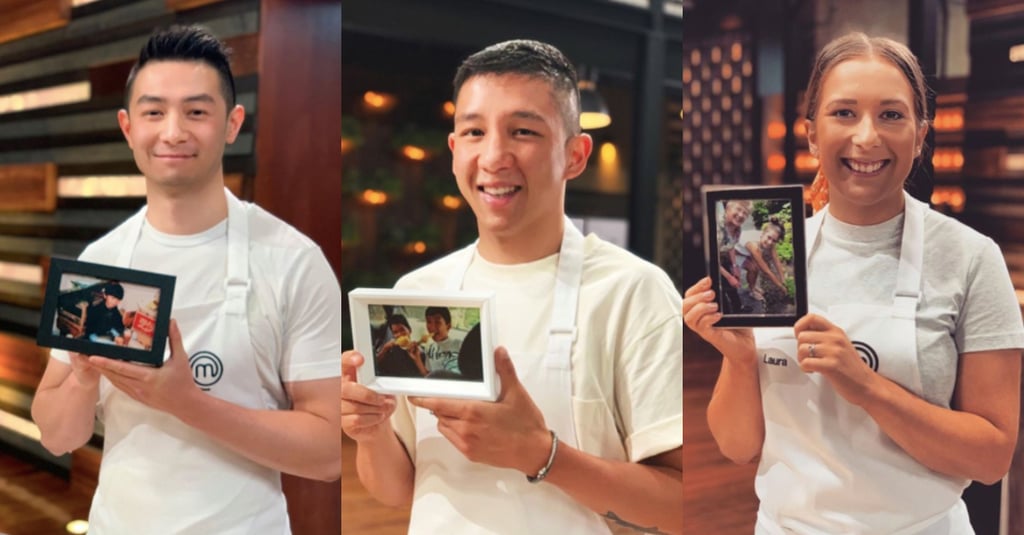 Last night's MasterChef provided plenty of tear-jerker moments. Beneath each contestant's Mystery Box was a photo sent in from one of their loved ones, and the contestants were instructed to create a dish inspired by that picture in 60 minutes. The best four contestants would earn themselves a place in tonight's Immunity Challenge.

Reece Hignell explained that his picture was a photo of himself at an Easter hat parade in primary school — that year, his nan baked fairy cakes for the bake sale, and he remembered feeling smug about it. "It's really nostalgic actually," he said. Poh Ling Yeow's photo was of her and her dad, and his golfing trophy: "It's really dorky," she laughed. Callum Hann joked that he hopes his wife never sees this photo, saying that it's a picture of himself holding the first fish he caught on a family holiday. The photo was revealed to have extra significance when he talked about his late father inspiring him to cook.

Khanh Ong teared up about his photograph of himself and his parents on their first day in Australia. He and his parents came to Australia as refugees when he was just two. "I was born in a refugee camp," he explained, saying that looking at the photo feels "intense" because that moment symbolises a massive change in their lives. And the sad truth was that no one could rush to comfort Khanh because of COVID-19. "We're all sending you hugs, even though we can't hug you right now," judge Melissa Leong said.

Reynold Poernomo was also brought to tears by his photograph of himself sporting a classic bowl cut at his parent's then-restaurant. He told the group that watching his parents work when he got home from school was one of the only times he got to spend with them, adding that he was separated from his parents by immigration for a period, with the restaurant closing down. His story made judge Melissa Leong and some of the other contestants cry as well. "I'm sure your parents are very proud of you," she said, through tears. "D*mn you, Reynold!"

After tasting, the judges decided they couldn't pick just four dishes, because everybody, putting so much emotion into their cooks, made so many delicious meals. Instead, they chose five. Jess Liementara made Hazelnut Chocolate Crack With Dark Chocolate Tia Maria Mousse, inspired by making cookies on a stick at a childhood birthday party. Poh made Vegetarian Dan Dan Noodles, influenced by her "nutty dreamer" dad; and Brendan Pang made traditional Dan Dan Noodles, something his brother, who featured in his photo, loves to eat.

Khanh made Chao Ga Dau Chao Quay, a chicken congee, for his migrant parents, and Reynold also dedicated his dessert to his parents — Bali Sunrise, a smokey coconut mousse, frozen yoghurt foam and tropical fruit salsa, made to look like a coconut, named for his parents' restaurant.

The lesson from this one: cooking from an emotional place creates the best dishes — and the best TV.

Scroll on to see all the pictures of the contestants holding their family photos: