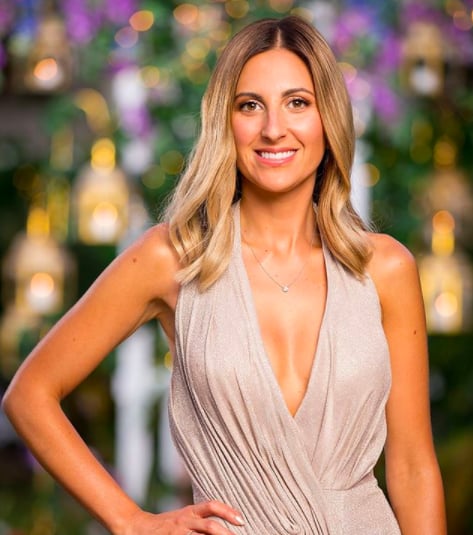 It's The Bachelor finale week! To celebrate, we're looking back on the swoon-worthy journeys of the contenders for Locky Gilbert's heart, including nurse Irena.

Irena quickly got Locky's heart racing in the premiere episode, where the couple immediately connected on the red carpet. But it was during the cocktail party that Irena impressed the Bachelor, unbuttoning his shirt to listen to his heartbeat, and letting him listen to hers as well! It was a winning move, which saw Irena score not only a place on the first group date, the photoshoot, but the intimate role of Locky's partner in the family photo.

She also earned an early single date, where she and Locky went fencing and shared a romantic kiss under the stars. Popping a bottle of champagne with a saber was a moment to remember! She was on the psychic group date, the final one before lockdown, where she was a little offput by suggestions her then-friend, future rival might be the mother of Locky's unborn son!

Bella and Irena's relationship frayed over "Love in Lockdown", but, even though Irena was working as a nurse during a global pandemic, she managed to maintain her strong relationship with Locky over the period, including on the onesie group date. They quickly locked lips when they met again at the mansion!

Irena and Locky got very intimate and touchy-feely on the human touch group date. In a tender moment, Irena admitted that she was worried she might, yet again, be the woman someone dates before they find their forever-person. But hopefully she was comforted a little by winning the first second single date of the season. She and the Bachelor headed off on a hiking date, before rugging up by a campfire. There Irena let slip what she was really feeling about Locky, saying, "I've fallen completely in love with you."

Related:
Swoon With Us Over Bella and Locky's Rocky But Mostly Romantic Bachelor Journey

We'll soon see if their relationship blooms even more over hometowns.