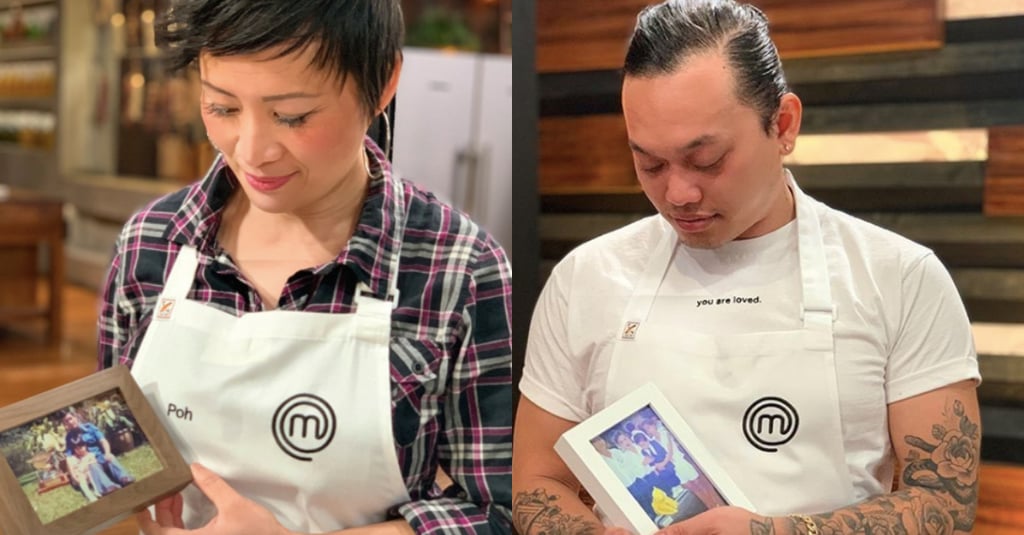 The Mystery Box challenge was to create a dish inspired by a photograph that had been sent into the show from a loved one. Khanh's photo was of the day, aged two, when he and his parents arrived in Australia from the refugee camp where he was born. Later he explained to the camera that while he was walking to the judges with his Chao Ga Dau Chao Quay, chicken congee, dish, he was trying to hold himself together. He went on to say that in his childhood home he would serve his elders as a sign of respect. "It's a dish that means a lot to me. It's quite personal."

Khanh shared a picture of his dish to Instagram overnight, writing that, "It's homely, it's humble and its to share. That's all I wanted to give the judges tonight.This dish reminds me of home, my childhood and my family. Win or lose. I'm proud of this. ❤️"

Reynold's picture was of himself at the family restaurant, the main place where, after school, he'd be able to spend time with his hard-working parents. He also explained that there was a period where his parents were taken away by immigration, which led to the restaurant being closed. He made a coconut dessert called Bali Sunrise, named after his parents' restaurant, which riffed on the flavours from his favourite childhood drink, cendol. As he worked, he described just how emotional the cook was: "It's just memories. The funny thing is, with that photo, as cute as it is, for me, it's not really happy memories."

Sharing a picture of himself holding the photograph to Instagram last night, Reynold wrote: "What a deep episode it has been tonight. Not many people know our story, we don't talk about it much. In life we all hold our own stories.

"Here's one to you Mum, Dad, my brothers & my aunty. And of course you know who you are, the hero that fought to keep us in Australia and now we are proud to call Australia home."

Poh Ling Yeow shared her migrant experience as well, drawing on a picture of herself and her father for inspiration in her dish of Vegetarian Dan Dan Noodles. When she presented her dish to the judges, she spoke about feeling "invisible as a migrant kid". "I always kind of dreamt that I would make something of myself."

People online were moved — both at hearing the contestants' powerful memories, and, for other migrant Australians, at seeing their stories represented on screen.