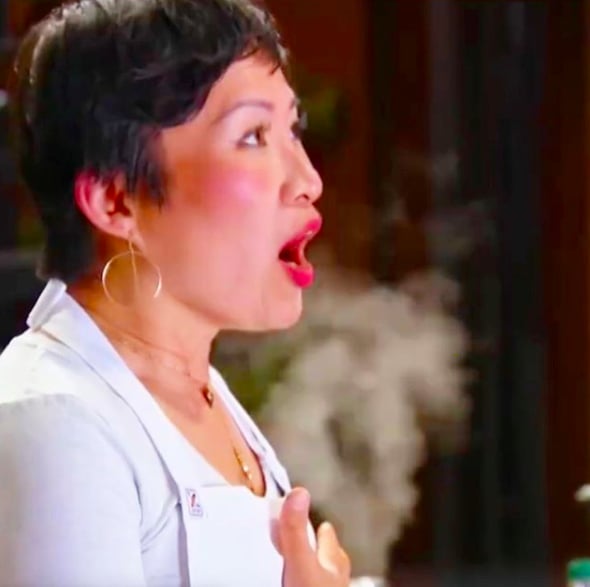 Poh Ling Yeow, long adored by fans for her chaotic and creative cooking, showed us a different side of herself as a chef on last night's MasterChef.

At the start of the Immunity Challenge, she declared herself focused on the prize as we get closer and closer to the finale. "I'm daring to think about the title now. It is just within my reach," she said. "I've got my eye on that trophy, my headspace is focused, and I want it."

Poh wrote a list of what she would be doing with her limited ingredients — just persimmon, duck, octopus and yuzu. This self-described "headstrong" and "determined" Poh we saw during the episode was definitely a stark contrast to the person we see most of the time — baking a cake up until the last second and staring anxiously at the oven, condensing a 30-minute dish into 10, deciding to add complicated elements at the last minute. "This is unheard of on the Poh bench!" Poh joked herself.

"I'm feeling really in control," Poh said later. "This is a feeling I haven't had in a long time and I'm just so happy with the way I'm working. I just feel like this is definitely the direction I need to drive in and it's yielding results."

She even started to plate up Smoked Duck Breast dish with five minutes to go! "I'm just so proud that I've managed to rein in my chaos and I'm in a really good place," she concluded.

People online also loved seeing "Organised Poh" come up with clever solutions to issues around smoking her duck without the ingredients she'd normally use and needing to sieve a particularly grainy octopus sauce. The cook overall showed us that Poh isn't just an entertaining yet seemingly haphazard force in the kitchen, but an innovative and meticulous force to be reckoned with — even if she didn't win immunity this time around.

Related:
It's Probably Time for the Internet to Ease Up on MasterChef's Pasta Virtuoso Laura Sharrad

Watching at home, we couldn't help but feel totally enamoured with this side of Poh:

Locky Gilbert
Bella Talks About the Silver Lining to Her Bachelor Heartbreak: “Sometimes Best Mates Are Better Than Boyfriends”
by Hannah Story 4 days ago

Locky Gilbert
Locky Just Dumped Bella and Her Response Was All-Time: "Can I Leave? I'm Going"
by Hannah Story 5 days ago

Locky Gilbert
In a Bachelor Twist, Both Irena and Bella Met Locky’s Mum at the Same Time
by Hannah Story 5 days ago
Latest Celebrity
×