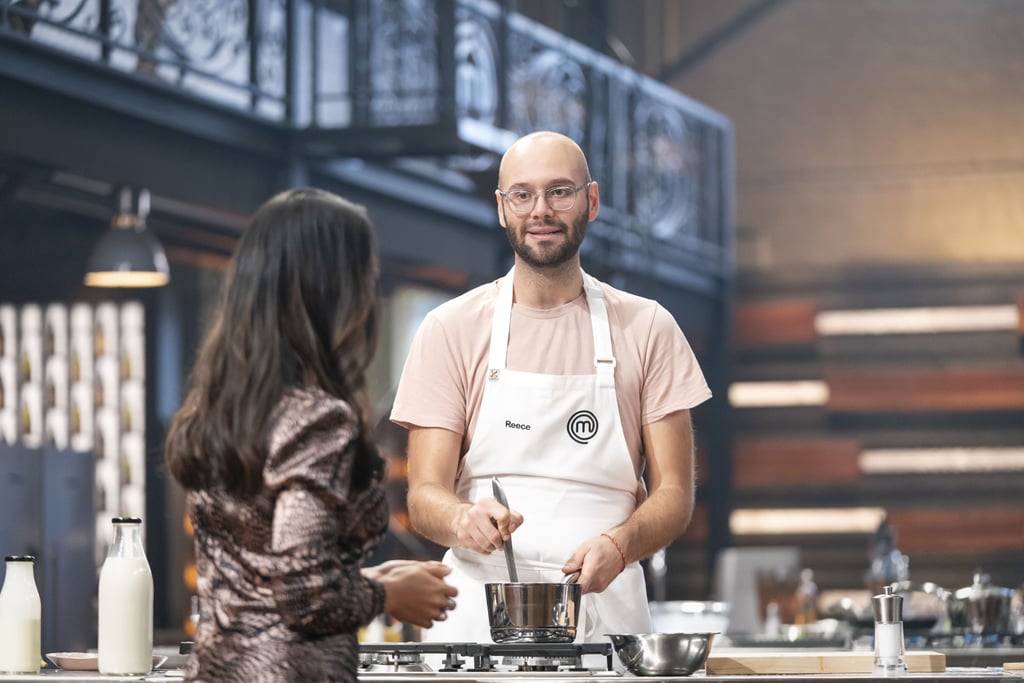 We love watching Reece on MasterChef. The dessert specialist from season 10 who has over the last week proved that he should be considered one of the frontrunners for Back to Win makes perfect, precious television every single episode.

On Tuesday, he won the Immunity Challenge without even seeming to break a sweat. He just quickly made the choice not to make a lemon tart as he'd intended, but to instead make a Baked Gin Tart with orchard fruits, gin and juniper and pantry staples, giving himself a whole 70 minutes to bake, and set about making a visually stunning, mouth-watering dessert.

No fuss, just the firm belief that this time he was going into the pointy end of the competition with a confident and positive mindset. "When life doesn't give you lemons, make a gin tart," Reece shrugged in the episode.

He even managed to steal the show on Sunday night's Elimination, despite having immunity — his shorts and socks combo were such a vibe that there were a number of panning shots over his outfit, as he supported his fellow contestants in their international challenge.

Watching him encourage his fellow competitors, reassuring people like Tessa Boersma this week and Emelia Jackson last week that they've "got this", also reminds us time and time again of the strong friendships on the show, and the selflessness of contestants. And that's before we've even mentioned the easy playfulness between Reece and his BFF Brendan.

Another thing we love about Reece on MasterChef: the way he celebrates his wins, with a look of both surprise and pride. "Yay! Go me!" he cheered last night. It's the perfect mix between restrained so as not to be seen as smug, but also boastful, because heck yeah! He's not up for Elimination this week!

Basically, this is just an excuse for us to heap praise on Reece, who brings a cheerful and sassy outlook to the show when we really need it —we're still trying to get over the loss of Khanh Ong and Sarah Tiong in the space of a week.

Here are some of our favourite takes on the joy Reece "The Tits" Hignell brings to the show:

Locky Gilbert
Izzy's Mum Just Asked Locky for His Sperm on The Bachelor & No, You Have Not Misread
by Hannah Story 18 hours ago