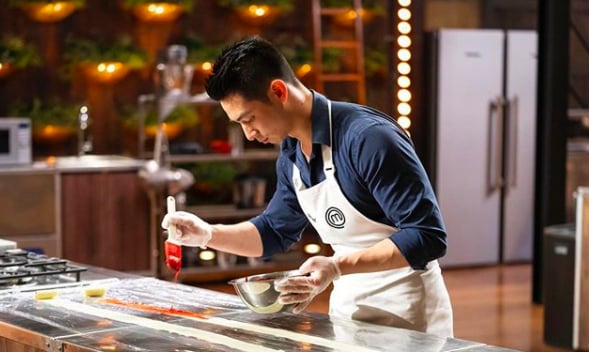 Reynold Being Sent Home From MasterChef: Back to Win Just Shy of the Grand Final Was Too Much to Bear

We were all devastated to lose Reynold Poernomo from MasterChef: Back to Win on Sunday night, after a Pressure Test from three-hatted chef Martin Benn.

The contestants needed to recreate his toffee apple in just three hours and 45 minutes, a brand new dish which is based on the five types of taste: salty, sour, sweet, umami and bitter, with five minutes to plate up in front of the judges.

While Reynold quickly nailed his apple strips, when they came out of the oven they were flat and not apple-shaped, ultimately coming out too small. He also had difficult with his leaves, which started to lose their shape when they were left too long in the oven. He also struggled during plating with a chocolate stem that broke in the last moments — lucky he had a back-up at the ready!

Unfortunately his toffee caramel was just too sweet and his leaves were bendy, even if they were the perfect colour, and his chocolate stem was perfect.

He became overwhelmed with emotion when he found out he would be going home, after telling the judges during the tasting about the importance of his family and their business, having grown up as a migrant to Australia. Melissa Leong reassured him of the inspiration he served to other young migrants and how he really embodied the drive for perfection of MasterChef.

Related:
We're Not the Only Ones Feeling More Than a Little Emotional Watching Callum Leave MasterChef

We'll miss seeing Reynold's awe-inspiring dishes day-in, day-out — but at least we know where we can find his desserts!