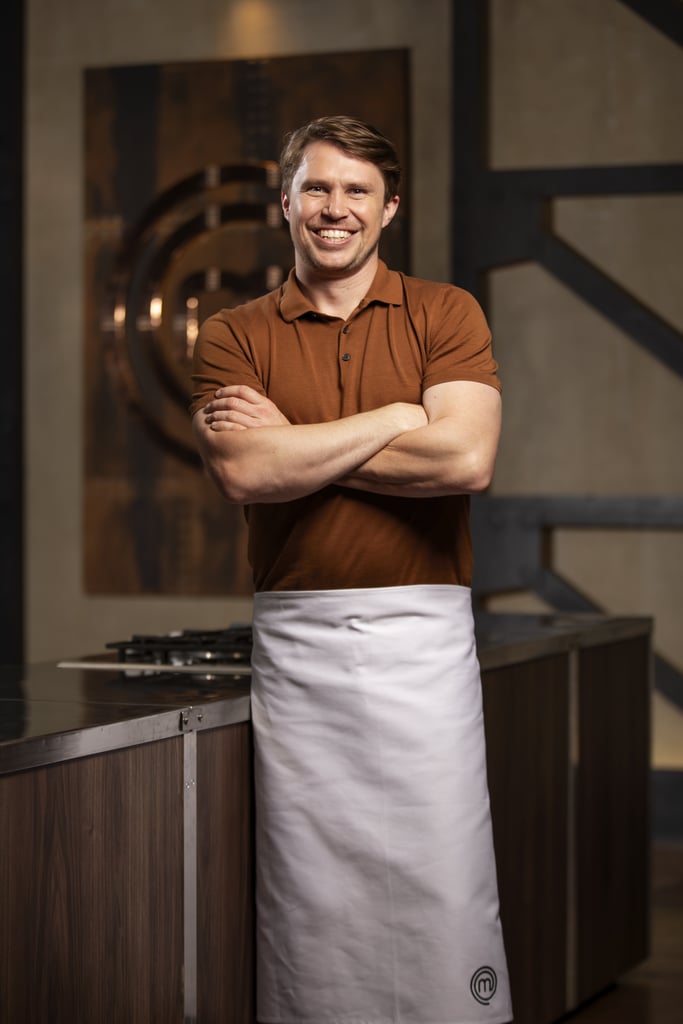 Simon Toohey, third place in 2019, was eliminated on tonight's episode of MasterChef, narrowly missing out on a spot in the top ten.

The first round was to make a savoury pie and sauce in 90 minutes, with the bottom four chefs — Reynold Poernomo, Tessa Boersma, Sarah Tiong and Simon — cooking in round two.

Khanh Ong and Reynold on the back bench laughed together about being out of their comfort zones. Even though one of Reynold's restaurants sells pies, he says, "I don't make pies." "I'm in trouble actually right now," he said. He made a chicken and leek pie with tomato chutney, but struggled with the puff pastry. He found the dish so challenging that he celebrated having made a pie at all!

Sarah made a braised pork belly pie with apple sauce and Tessa made her grandma's traditional beef pie recipe, while Simon made a beef and stout pie with a tomato and chilli sauce. But the dishes failed to impress the judges — Simon's needed some herbs to balance the filling, Sarah and Tessa's fillings were too dry, and Reynold's featured raw pastry but overcooked chicken.

The second round was to make a dish that represented Australia to them in an hour, with an extra 30 seconds to plate up in the tasting room if needed.

Tessa made a sticky braised pork, drawing upon Australia's melting pot of cultures and cuisines. Reynold, for his first time in a round two elimination cook, crafted his own take on the iconic Cherry Ripe with chocolate mousse and a coconut gelato, trying (unsuccessfully) to make it look a little like the Sydney Opera House.

As Sarah made a charcoal chicken with southeast Asian flavours, to talk about her mum's favourite Australian food and the immigrant experience at once, Simon attempted to cook a broccoli stem in a sous vide bath, using broccoli in most elements of his dish as a tribute to the farmers, while highlighting his style of sustainable vegetarian cooking. While the other contestants seemed happy with their dishes, Simon acknowledged at the end of his cook that he wasn't totally happy, with his broccoli cooked too long in the sous vide.

The judges commended Reynold, Tessa and Sarah's dishes, even if they noted that the potato cubes didn't belong in Sarah's otherwise flavour-packed dish and Tessa's dry pork belly. But they deemed Simon's dish "underwhelming", even though Simon has made them some amazing vegetable dishes in past cooks.

Related:
This Deep-Fried Broccoli Po' Boy From MasterChef's Simon Is a Reminder That Vegetables Do Taste Delicious

Andy Allen farewelled Simon by describing as a legend with an infectious energy, adding that he expected Simon to succeed in his next endeavour: "We're sure that whatever you touch, you'll smash it."

"I love you guys," Simon said on his way out, as he bounced out of the MasterChef kitchen.

Goodbye to the biggest grin on MasterChef!

Read on for our interview with Simon:

Celebrity Beauty
Barbie Ferreira Is Preparing For a Zoom Holiday, but She'll Still Be Wearing Glitter
by Jessica Harrington 10 hours ago

Celebrity Interviews
How True to Life Is the Trial of the Chicago 7 Script? For Yahya Abdul-Mateen II, Very
by Kelsey Garcia 2 days ago
Latest Celebrity
×